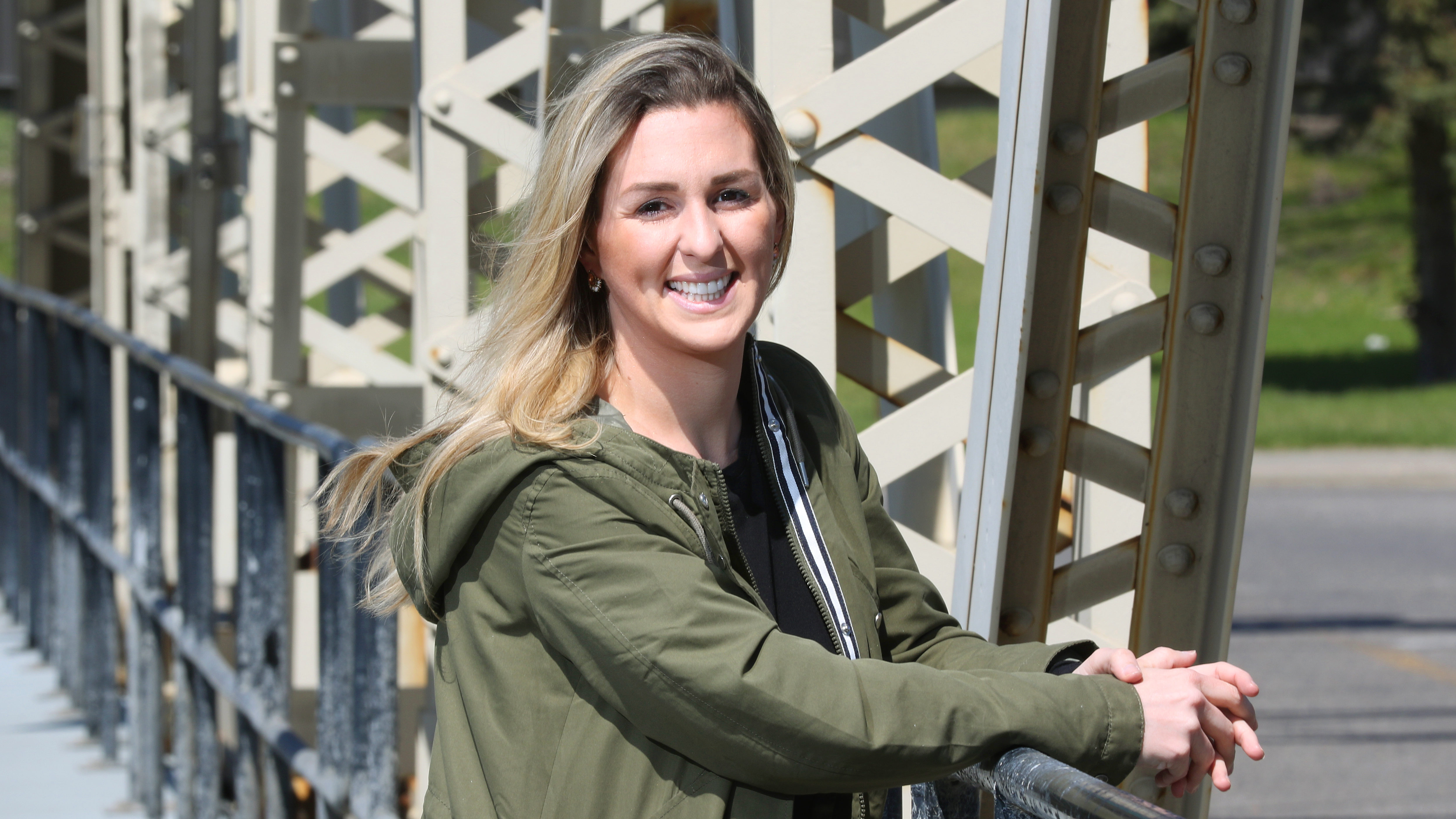 As a university student in New Brunswick, Heidi McKillop joined friends to protest against oil and gas fracking, guided by beliefs that she now says were misinformed. Today the 31-year-old is proud to be an advocate for Canada’s oil and gas industry, but she admits that at first it was a challenging journey.

After graduating with a degree in social work in 2012, McKillop moved from Atlantic Canada to Alberta. She got a job as a receptionist in downtown Calgary, but wasn’t happy about working for a company with ties to oil and gas. She says a mentor in the office started to raise her interest in learning about the industry, but it wasn’t until she lost her job — a casualty of the 2014 oil price collapse — that she started to complete the connections about oil and gas in her everyday life, the economy, and the value of responsible development.

“I had only a relationship in my mind between gas at the pumps and our cars, and that was it. When I started looking at what oil and gas byproducts were, it really is kind of everything. It’s down to our foods, it comes down to our liquor, it comes down to our clothes,” says McKillop, who during the downturn found work as a waitress at a popular downtown Calgary restaurant and bar.

“I remember the first time it clicked in my head; I sat and I cried. I was so overwhelmed by all the information.”

While she initially found it challenging to confront her personal connection to oil and gas, McKillop quickly found an upside — she learned about Canada’s responsible oil and gas development practices, or what is currently known as environmental, social and governance (ESG) performance, relative to other oil producing nations.

McKillop was so inspired and frustrated by what she learned that in 2018 she self-funded and produced a documentary called A Stranded Nation, about how misconceptions of Canada’s oil and gas industry have destroyed economic opportunities for Canadians while other jurisdictions have benefited.

“I believe that this debate is really centred around fear,” she says. “I think that there is a lot of fear from the opposition that we are going to extract all the natural resources from the earth without any kind of balance or without any kind of stability. However, what is happening in our oil and gas industry in Canada is certainly not that. We are world leaders in environmental protection and human rights.”

As Canada joins the rest of the world in easing Coronavirus lockdowns and starts to act on economic recovery, there could be an opportunity to change the conversation about Canadian oil and gas, says Martha Hall Findlay, former CEO of the Canada West Foundation and Suncor Energy’s new chief sustainability officer.

“Real sustainability is the planet, but it’s [also] people, and it’s prosperity,” she said in a mid-May webinar hosted by the Canadian Club of Toronto.

“We have people losing their jobs; we have people suffering, we have families struggling. That could allow us to reset a little bit the conversation, move away from the polarization and regain the ability to have really thoughtful, objective, thorough, honest conversations about where we move forward as a country on all of those levels.”

Hall Findlay said “the entire population of Canada cares about the environment” and the oil and gas industry has “made huge progress over the last decade” in improving its environmental performance.

For example, according to IHS Markit, the average greenhouse gas emissions per barrel from the oil sands decreased by 21 per cent between 2009 and 2017, and this could fall another 16 to 23 per cent over the coming decade. That’s without potentially game-changing technologies, some of which are near commercial application.

Oil sands producers have set targets to reduce environmental impacts both as individual companies and as collaborators, through groups including Canada’s Oil Sands Innovation Alliance (COSIA). Since inception in 2012, COSIA companies have shared more than $1.4 billion of intellectual property to help accelerate implementation of technologies that help achieve these targets.

“It’s innovation at every stage of the value chain, from the geology through the processing through to how you move the oil and ultimately to its end use and to abandonment [and] reclamation,” Gordon Lambert, former CEO of the Alberta Energy Regulator, told the Canadian Club webinar.

While there is often a focus on Canada’s oil production, the country is also one of the world’s largest producers of natural gas, a fuel in high demand particularly in growing Asian markets. Natural gas is expected to surpass coal as the world’s second-largest energy source over the next 20 years, with China and India expected to more than double their gas consumption as part of their efforts to reduce GHGs and tackle noxious air pollution.

Through liquefied natural gas (LNG) exports, Canada will soon be able to supply this global market. The LNG Canada terminal, currently under construction near Kitimat, BC, is expected to prove out multiple expected benefits for its targeted customers in Asia including shorter shipping times, lower costs and, perhaps most significantly, lower GHG emissions than LNG from other jurisdictions.

Lambert agreed with Hall Findlay that as the COVID crisis subsides there is likely to be more conversation about Canada’s value as an oil and gas producing country in the global market.

“One of the central insights coming out of COVID [is] that you can’t afford disruption of supplies of key products; you have to have reliability under all circumstances. Canada is a player in that global oil world, and we’re a player that is in a well-governed country,” Lambert said.

“We often talk environment, social and governance aspects of oil and gas, ESG being the acronym, but the ‘G’ part doesn’t get discussed a whole lot. A lot of the oil in the world is in jurisdictions that have not democratically formed governments; they do bad things with the revenue.”

Oil and gas production from jurisdictions recognized as “Not Free” by Freedom House is increasing, according to Canadian Energy Centre research. The result is that revenues are increasingly directed to regimes that can use the funds to suppress their own people or where substantial revenues flow to regime leaders.

Canada, which is “Free,” has vast resources of oil and gas and a decades-long track record of incremental and step-change innovations as the industry adapts to market conditions. It’s a critical point because oil and gas — and lots of it— will continue to be required for decades.

“There is a whole ecosystem of organizations and industry sectors that support delivering energy,” Stuart said.

According to Statistics Canada, in 2016 — the most recent year for which data is available — the oil and gas sector directly and indirectly employed nearly 550,000 people across the country, 11,900 of whom identify as Indigenous. In 2015/16, the industry spent $3.3 billion with Indigenous-owned businesses, according to the Canadian Association of Petroleum Producers. And across Canada, CAPP says the oil sands sector alone spent approximately $3.2 billion with a supply chain of more than 2,000 businesses in 2016/17.

The unprecedented temporary drop in oil demand as a result of global Coronavirus lockdowns has wiped out significant opportunities related to Canadian oil and gas spending this year. IHS Markit estimates that producers in Western Canada have cut more than $12 billion from already conservative 2020 capital budgets.

But there are already indications that the global oil market is recovering, according to the International Energy Agency (IEA). In its latest forecast, the IEA increased its expectation for near-term second quarter oil demand by 3.2 million barrels per day as a result of easing lockdowns and reduced production from OPEC+ nations, the United States and Canada.

Visions of the Future

Put another way, even in the most carbon-aggressive scenario the combined share of oil, gas and coal in total primary energy is still expected to be 68 per cent in 2040, albeit down from 84 per cent in 2019.

McKillop, who now works in business development for a Calgary engineering company, wants Canadians, especially young Canadians, to take the time to consider the complexity of energy issues, but she knows that can be a challenging proposition.

“The problem is that it’s so polarizing and these are concepts are very difficult to get people to listen to because they are kind of boring to the average person,” she says.

“We’re so affluent here in Canada; we have this resource and we absolutely take it for granted in every shape and form.”