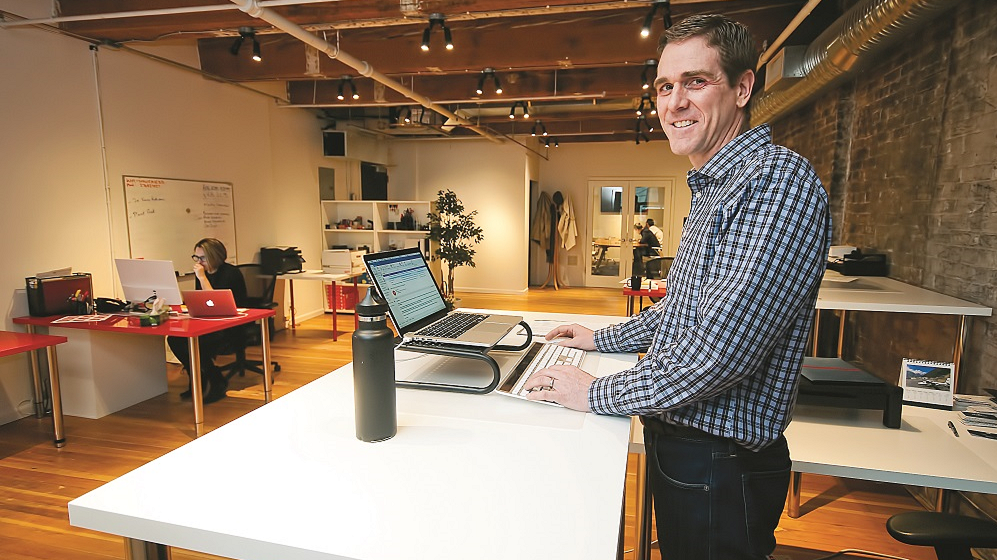 Marty Reed knows it is unusual for an established Silicon Valley venture capitalist to abandon the headquarters of tech to set up shop in Canada, but it’s something he did happily five years ago.

Driven by a deeply rooted passion for issues around climate change, Reed says he followed the opportunity to make an impact in the world of energy.

He was recruited to Vancouver to launch Evok Innovations, a cleantech venture capital firm focused on improving the economic and environmental performance of Canada’s oil and gas industry.

“Silicon Valley is absolutely an amazing ecosystem, but one that is almost exclusively focused on software. If you want to have an impact in the world of energy or natural resources, it’s just not the place to be,” Reed says.

He was drawn by Canada’s confluence of great science, technology, engineering and math talent with a resource sector and increasing awareness of the need to innovate, he says.

The company is part of what is referred to in the sector as its “innovation ecosystem,” which has gained strength in recent years as the industry presses harder for accelerated change.

Cleantech innovation has driven significant improvement in the environmental performance of the oil sands in particular, including lower greenhouse gas emissions intensity, reduced fresh water use intensity, lower land disturbance and what could be the beginnings of shrinking tailings volumes.

“They’ve really upped their game consistently over a long period of time and that’s been a boon for a lot of the clean technology that we actually are quite good at in this province,” says Jason Switzer, executive director of the Alberta Clean Technology Industry Alliance (ACTIA).

“We absolutely need to have the oil and gas sector actively engaged in a positive way in moving solutions forward.”

Cleantech and oil and gas

Cleantech is “any product, process or service that improves operational performance, productivity or efficiency while reducing consumption, waste or environmental pollution,“ according to a report for the Calgary-based Clean Resource Innovation Network (CRIN).

Laura Kilcrease, CEO of provincial technology funding agency Alberta Innovates, says there’s a lot of cleantech happening in oil and gas that people just don’t think of in those terms.

This includes existing technology areas where Canada is a leader like carbon capture, utilization and storage (CCUS), and new opportunities like producing carbon fibre from bitumen.

Since 2012 the biggest oil sands players have increased annual investment on research and development by approximately 150 per cent and consistently spend more on R&D per barrel than global oil and gas majors, according to a recent report by BMO Capital Markets.

The investment is reaping benefits. Between 2009 and 2017 oil sands emissions per barrel decreased 21 per cent, fresh water use intensity for drilled projects declined by approximately one-third and designs for new processing facilities require up to 60 per cent less land footprint.

Pushing harder on R&D has also led to a positive trend in the important issue of mined oil sands tailings. Multiple new technologies have been tested and deployed since 2015, BMO reported, with notable successes including Suncor Energy achieving the reduction of total tailings at its Base Mine by 17 per cent between 2015 and 2019.

“The oil sands industry’s major operators have collectively invested more than $1 billion per year in R&D initiatives since 2012, including a record $1.2 billion in 2018. This amounts to $9.3 billion over the past decade, notably higher than the global majors on a per barrel basis,” wrote BMO analyst Jared Dziuba.

“We believe this ramp-up in innovation spending is clearly reflected in the [environmental, social and governance] performance of the sector. What is more, this mounting R&D investment may just be starting to bear fruit and companies just at the cusp of demonstrating the full impact of innovation on environmental performance.” 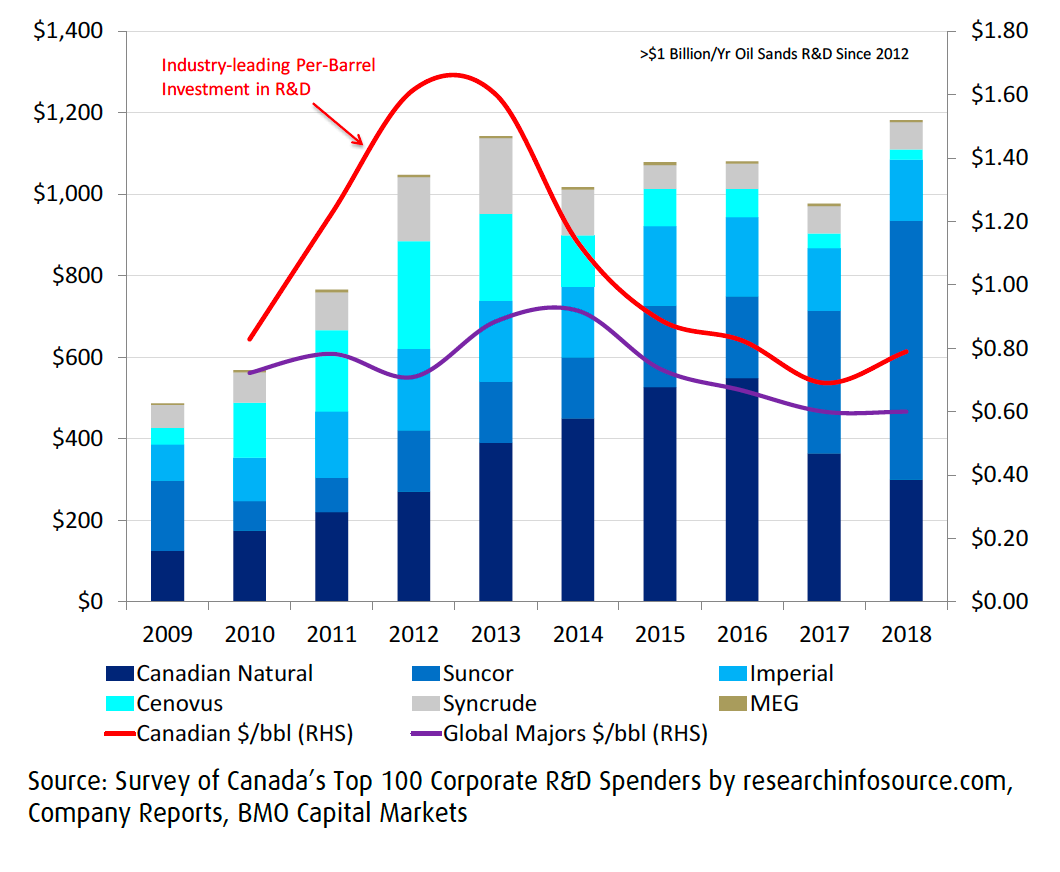 Canada’s oil and gas industry has a leg up in its work to develop and deploy new technologies faster because of a level of collaboration that is globally unique, BMO said.

Formed in 2012 in part to combine and streamline efforts of existing collaborative groups like the Oil Sands Leadership Initiative and the Oil Sands Tailings Consortium, the eight current owner members of COSIA produce over 90 per cent of oil sands today. So far, they have shared approximately $1.5 billion worth of technologies related to GHGs, water, land and tailings management.

“I think people outside of the industry and elsewhere in Canada would actually be really surprised and impressed by just the amount of things that we’re up to, the scale of things and the extent that the industry goes to manage impacts in those areas,” says COSIA chief executive Wes Jickling.

“You do this for eight years at that scale and you are going to see improvements in environmental performance, and we are. It’s not to say that all of the improvements of the oil sands in that time is attributable to COSIA, but as a sector, COSIA has had a role in this.”

BMO analyst Dziuba says the strength of collaborations like COSIA is not just that they bring together major competing oil and gas producers, but that they also create networks that open doors to technology providers.

“They’re trying to bring the cleantech people that might have innovative solutions to the companies and work with them on piloting, and there’s a lot of different examples of how that’s been successful,” he says.

The value of the collaboration is clear to Germain Belzile, senior fellow with the Montreal Economic Institute.

“Canada is really in front of the pack in terms of innovation, and it’s a little sad because if we get out of that [oil and gas] business, it will leave Venezuela and other places like that where they don’t innovate and where they emit more,” he says. “In fact, we need more Canadas. I think that’s very clear.”

The next generation of oil and gas cleantech

While the achievements over the last decade of the oil sands industry to reduce its environmental footprint are impressive, COSIA’s Jickling knows people are more interested in what’s going to happen over the next decade. He’s confident it will play out well.

“If you look at our track record, and you look at the improvements we’ve made in sustainability in the last number of years and you look at where we’re going, Canada’s oil sands are able to meet growing demand more sustainably than other sources of oil,” he says.

The industry’s embrace of cleantech has support from major players including the Royal Bank of Canada, which in 2019 announced a business target of $100 billion in sustainable financing by 2025. In addition to renewable energy and clean transportation, eligible companies for funding include pollution prevention and control, sustainable water management, and sustainable land use.

“Our oil and gas sector already stands out as an investor in cleantech – let’s build on its momentum so that the industry plays a central role in the transition to a low-carbon economy in Canada and around the world,” RBC CEO David McKay wrote in the bank’s 2019 annual report.

“Canada needs to meet demand by selling our oil and gas overseas where we can derive a premium for our goods and, in turn, generate public monies to invest further in clean energy and, more broadly, social programs.”