The Global Oil Market Is Broken, Drowning in Crude Nobody Needs Right Now

U.S. oil drillers cut the most rigs in a week in nearly 5 years -Baker Hughes

Why Companies Are Turning To Digital Marketing To Survive COVID-19 – Bernard Marr: Forbes.com

Oil Industry Braces for Biggest Idling of Wells in 35 Years

Federal deficit to top $112 billion or more in coming year due to COVID-19, PBO says 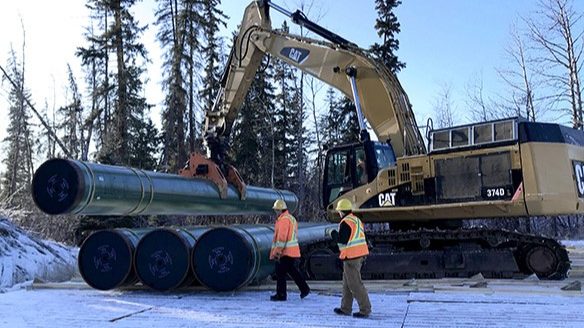 The United Nations Committee on the Elimination of Racial Discrimination has released a directive calling on the Government of Canada to immediately suspend construction of the Trans Mountain Expansion, Coastal GasLink Pipeline and Site C Dam, until “free, prior and informed consent” is obtained from all impacted Indigenous communities.

The UN Declaration on the Rights of Indigenous Peoples (UNDRIP) requires ‘free, prior and informed consent,” while Canada’s current system imposes “a duty to consult, and where appropriate, accommodate” Indigenous communities regarding development.

The committee’s directive ignores the years of engagement and consultation on these projects, the numerous agreements reached between the companies and Indigenous communities, and the role of Canada’s regulatory and court system to resolve project-related disagreements.

Fact: Trans Mountain has been engaging with Indigenous communities regarding its expansion project since 2012. The company says it has gone above and beyond government requirements and “met with any Aboriginal group that requested to share or receive information,” resulting in more than 30,000 points of contact with more than 133 Indigenous communities in Alberta and B.C.

This includes providing $13 million in capacity funding to enable groups to conduct traditional land or marine use studies, and participate in traditional ecological knowledge studies and other community-designed research.

Trans Mountain has signed at least 48 mutual benefit agreements (MBAs) with Indigenous groups, agreements that are expected to flow more than $400 million to Indigenous communities. This is the largest number of bands that have officially agreed to support any single project in Canadian infrastructure development history.

Fact: Indigenous opposition to the Trans Mountain Expansion is decreasing. In mid-November two bands that were part of a Federal Court of Appeal challenge against the project dropped out of the action after reaching agreements with the company.

In December the court reserved its judgment in the case, in which four remaining bands alleged the Canadian government failed to properly consult them on the project in its second round of engagement. Judges said they needed time to make a decision after a three-day hearing, Reuters reported. Their decision has yet to be released.

Fact: Indigenous communities want to own the Trans Mountain project. Three Indigenous-led ownership groups are bidding to purchase the entire project from the federal government: The Iron Coalition, Project Reconciliation, and the Western Indigenous Pipeline Group.

Fact: The Federal Court of Appeal overturned Ottawa’s original approval of the Trans Mountain Expansion in August 2018, ordering the government to redo its consultation with Indigenous groups and the federal energy regulator to assess the impact of increased tanker traffic. After the federal government consulted further with 129 Indigenous groups and the National Energy Board (now the Canada Energy Regulator) completed the additional assessment, Ottawa approved the expansion project for a second time, enabling construction work to proceed.

In fall 2018 TC Energy announced that the elected councils of all 20 Indigenous groups have signed MBAs to support the project. The Coastal GasLink project has also awarded $620 million in contracts to Indigenous businesses.

“Coastal GasLink set the standard for how to deal with First Nations people,” Stellat’en First Nation Chief Archie Patrick told an LNG conference in May 2019.

Fact: The Supreme Court of British Columbia ruled last week that the Coastal GasLink project has all necessary permits and authorizations to construct, issuing an injunction against protesters including members of the Wet’suwe’ten Nation.

“The defendants may genuinely believe in their rights under Indigenous law to prevent the plaintiff from entering Dark House territory, but the law does not recognize any right to blockade and obstruct the plaintiff from pursuing lawfully authorized activities,” wrote Justice Marguerite Church.

She also acknowledged that that the territory is unceded: “The aboriginal title claims of the Wet’suwet’en remain outstanding and have not been resolved either by litigation or negotiation, despite the urging of the Supreme Court of Canada.”

Fact: BC Hydro acknowledges that the approach taken between the 1960s and the 1980s to build previous major dam projects “left a legacy of mistrust” by First Nations in the project area. “We’re working to rebuild their trust today,” the company says.

Fact: BC Hydro started consultations with First Nations in 2007, approximately eight years before construction started in 2015. Reports on the consultation process can be found here.

The company says it has engaged about 60 Indigenous groups in B.C., Alberta, Saskatchewan and the Northwest Territories, with a greater depth of consultation with Treaty 8 First Nations that are in closer proximity to the project.

As a result of ongoing Indigenous consultations, BC Hydro says it has adjusted aspects of the Site C project including the approach to tree clearing and debris management, slower filling of the reservoir, the route of the re-aligned Highway 29, and its fish passage program.

Fact: In October 2018, the B.C. Supreme Court ruled against two First Nations wanting to halt the Site C project, stating that shutting down construction “would be likely to cause significant and irreparable harm to BC Hydro, its ratepayers and other stakeholders in the Project, including other First Nations.”

The court directed for a trial to be held considering whether the project infringes aboriginal treaty rights by mid-2023, before the fill of the dam’s reservoir. That trial has been scheduled for 2022.

UNDRIP has been adopted by Canada but not incorporated into federal law. B.C. passed legislation to implement UNDRIP in November 2019, and is expected to be followed by N.W.T.

Dale Swampy, president of the National Coalition of Chiefs, says that while the intent of UNDRIP is noble, he approaches it with caution.

“The over-riding goal of all public policy should be to defeat on-reserve poverty. Resource development offers the most practical and achievable path to creating economic development and business and employment opportunities for those living on reserve, especially for communities located in rural and remote regions of Canada,” Swampy wrote in the Financial Post in December.