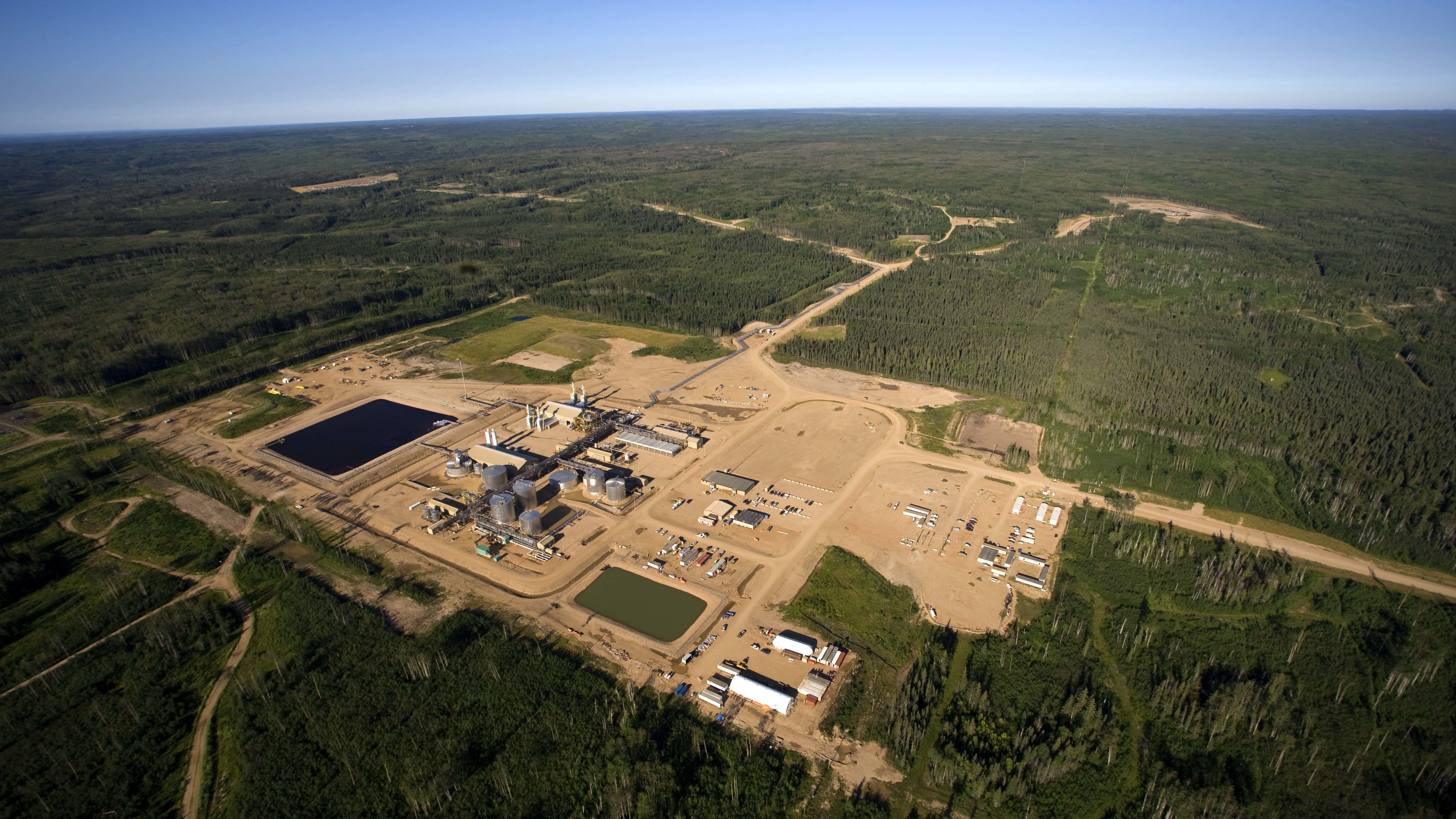 Aerial view of the first phase of the Surmont in situ oil sands project in northeast Alberta. Photograph courtesy ConocoPhillips

Canada’s oil sands are leading the way in producing some of the planet’s most responsible barrels of oil, says the author of a new investment report by BMO Capital Markets.

However, outdated and ill-informed data is too often being used to amplify negative perceptions of the oil sands industry, which ignores Canada’s leadership not only in environmental stewardship, but in social impact and how those critical resources are governed.

Analyst Jared Dziuba says it’s good news for Canada’s oil sands industry that responsible investing is now mainstream, where companies or sectors are prioritized for high marks on environmental, social and governance (ESG) performance. That’s because oil sands producers have been been practicing ESG “since before it was even a thing.”

But, he says there has been a lack of information that summarizes with current data what the oil sands sector collectively is doing to make change versus the rest of the global industry.

This could influence decisions such as the recent move by Norges Bank Investment Management to stop investing in four of Canada’s largest oil sands players because of concerns about greenhouse gas (GHG) emissions.

“Even now there are some very recent reports and prominent organizations that still reference pre-2012 emissions intensity for the oil sands producers, and since 2012 most of these projects have cut emissions 20 to 30 per cent, so it’s a totally different story,” Dziuba says.

“I think a lot of people haven’t seen the data aggregated and collected to see what those ESG trends actually are.”

And ESG is about more than environmental footprint alone. For Dziuba, the most important letter in the acronym is G, where Canada is recognized as a global leader.

“Everything flows down from good governance structure, and that begins with government policy and the regulatory environment, and then it all filters down into corporate governance,” he says.

“That relates to all these important risks, like are they managing their environmental policies, are they on top of their emissions, do they have a plan in place to reduce them? That all comes from the governance structure.”

Canadian oil production should have strong long-term prospects because the sector is ahead of the curve on ESG, Dziuba says.

That assessment does not require growth in global demand. Because of natural production declines alone, BMO estimates that even in the International Energy Agency’s most aggressive decarbonization scenario, more than 50 million barrels per day of supply will have to be replaced by 2040.

Canada’s investment case is additionally boosted by its unique oil geology, which enables projects to operate for decades at low or even near-zero decline.

“Not only is the resulting stability ideally suited to backfill anticipated declines in world oil supply, but the long-term physical footprint may also be meaningfully lower,” BMO says. “Canada’s ESG leadership is a meaningful competitive advantage.”

Canada #1 in all ESG categories vs. top oil and gas reserve holders 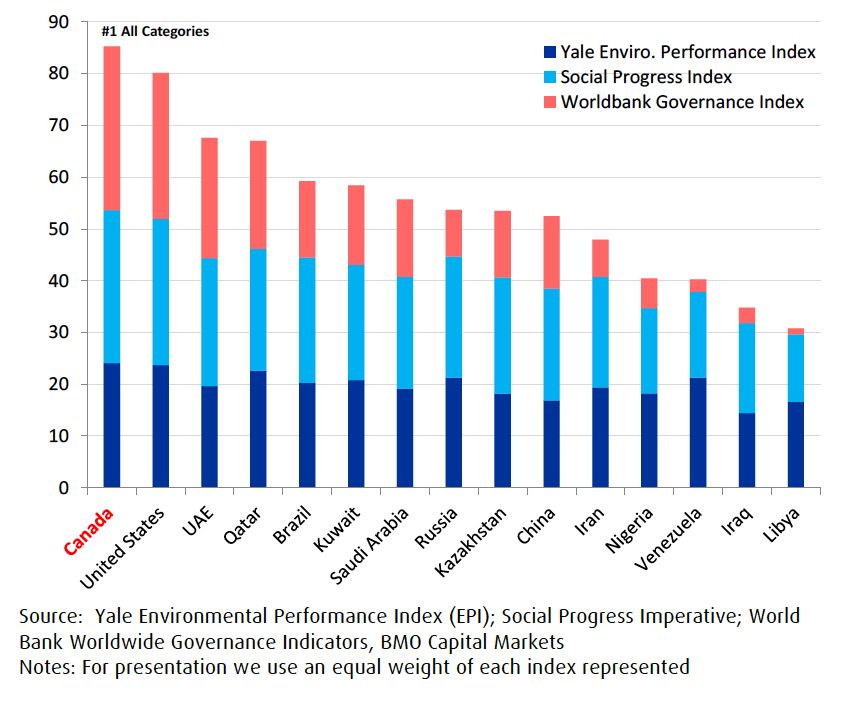 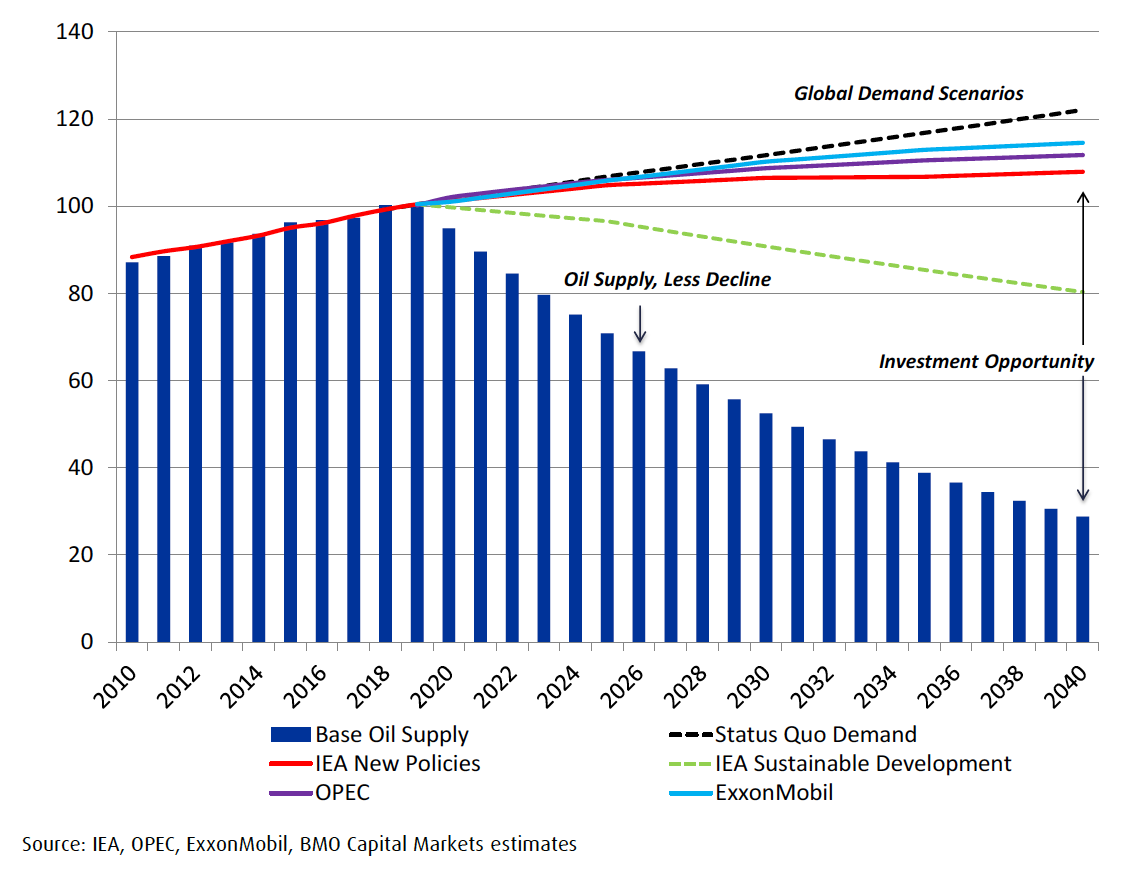 Alberta is one of the world’s few oil producing regions with regulated disclosure protocols and a carbon tax on production. The province has held industrial emitters accountable with a price on excess carbon since 2007, increasing from $15/tonne to $30/tonne currently.

BMO reports that oil sands projects have decreased GHG intensity on average by approximately 24 per cent since 2012, and now emit just 4 to 6 per cent more than the global average from production to end-use. Several projects already boast below-average carbon footprints. 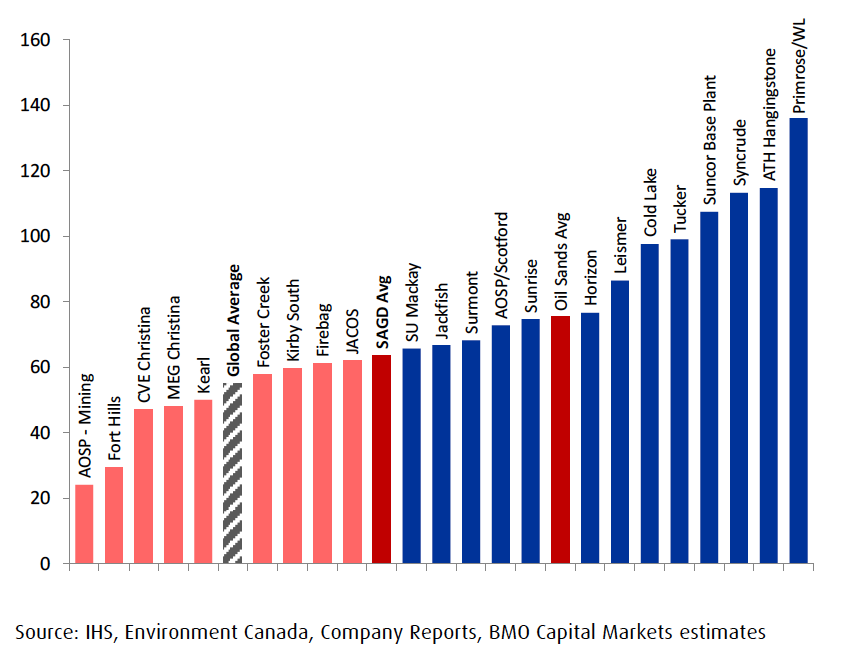 While the portrayal of the oil sands sector often focuses on open pit mining, the true face of the industry is drilled or “in situ” production, which accounts for more than 80 per cent of the resource base, BMO notes. The main in situ technology is called steam assisted gravity drainage (SAGD).

“A typical SAGD project requires 75 per cent fewer wells than a comparable [shale] oil project [in the U.S.] over its lifetime, equating to one-fifth of land disturbed … The cumulative number of [shale] oil wells drilled in support of base production aver- ages 12.4 wells per barrel per day, compared to just 2.4 wells for SAGD,” BMO reports. 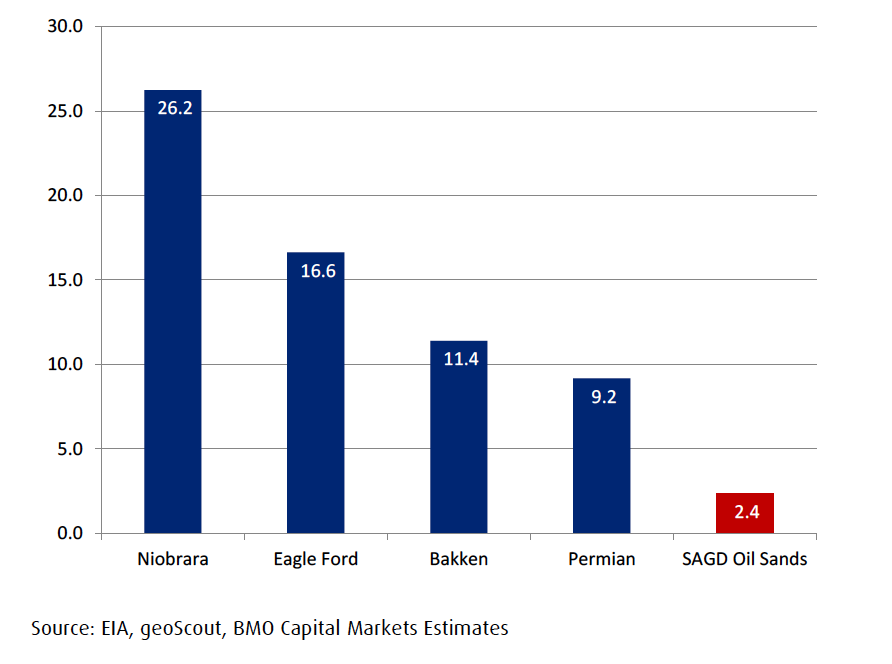 3. Better and decreasing water use

Environmental performance isn’t all about GHGs. Water management is another critical metric for oil production, and in the oil sands it is improving. For example, in situ producers reduced fresh water use to just 0.2 barrels per unit of oil in 2018, or 60 to 70 per cent below competing U.S. tight oil. 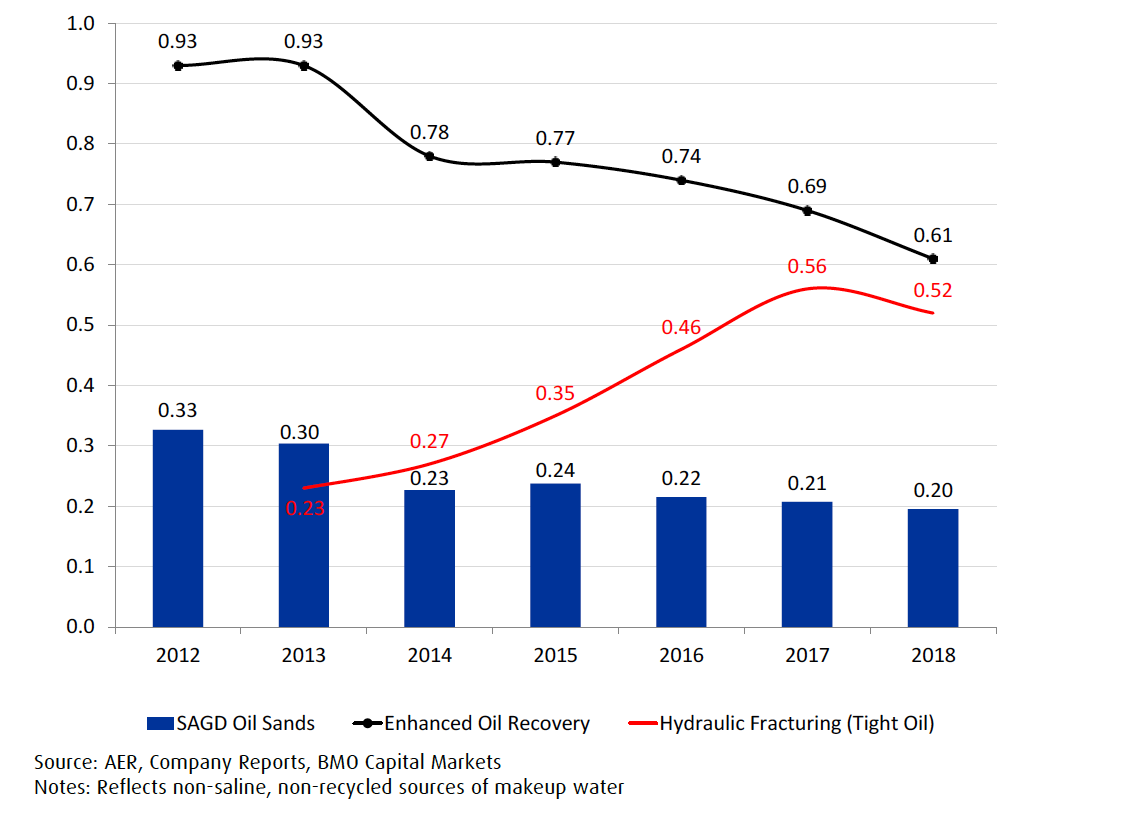 Technological innovation to reduce the footprint of oil sands operations is working. For example, BMO says that as a result of strict new rules in 2015, oil sands mining operators have accelerated work on new technologies to reduce the accumulation of tailings. There are early signs of a step change.

“The application of new treatment technologies has already restricted growth in tailings well below quotas. Canadian Natural has so far reduced tailings by 50 per cent for new phases at Horizon, while Suncor has managed to actually decrease aggregate fluid tailings since 2016.”

BMO says tailings management will be an important and exciting area to keep an eye on in coming years, and that it could act as a catalyst for the sector to vastly improve its image on the world stage. 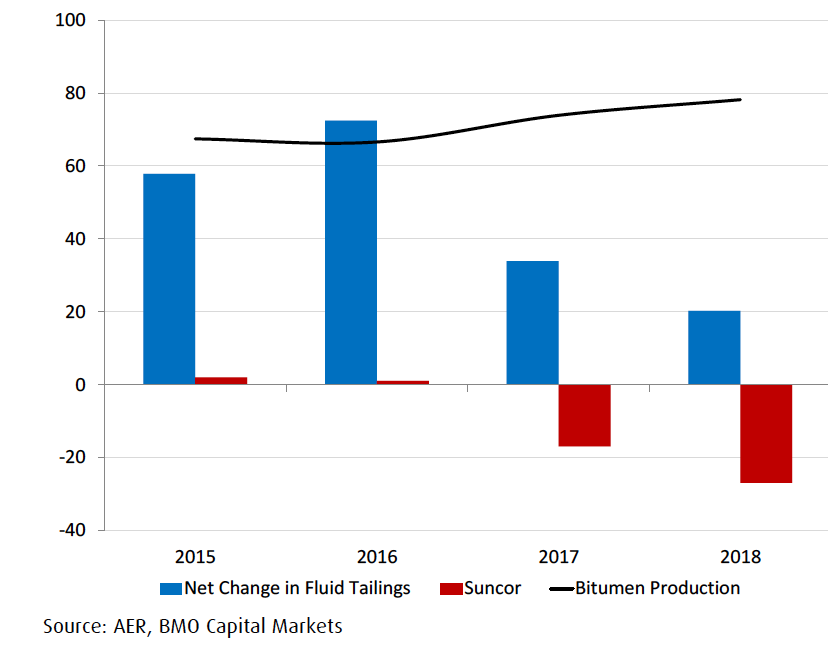 For example, since 2012 the top seven oil sands producers have spent $13 billion with Indigenous-sourced services, with annual spending topping a record $2.1 bil- lion in 2018.

“The portion of industry spending now represented by Indigenous business has expanded three-fold to over 18 per cent of capital and 6 per cent of total spending.” 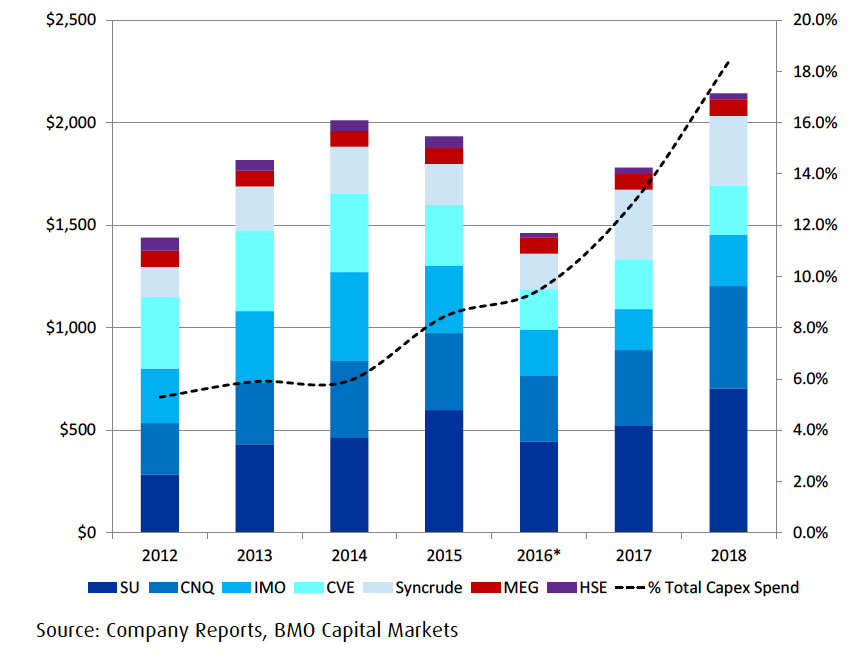 “Executive salaries among the top four oil sands producers have decreased 26 per cent on a per-unit basis since 2012. Management compensation for producers has traditionally been aligned with production growth and other operating metrics, but companies have tied performance compensation to specific environmental and social metrics to motivate sustainability practices.” 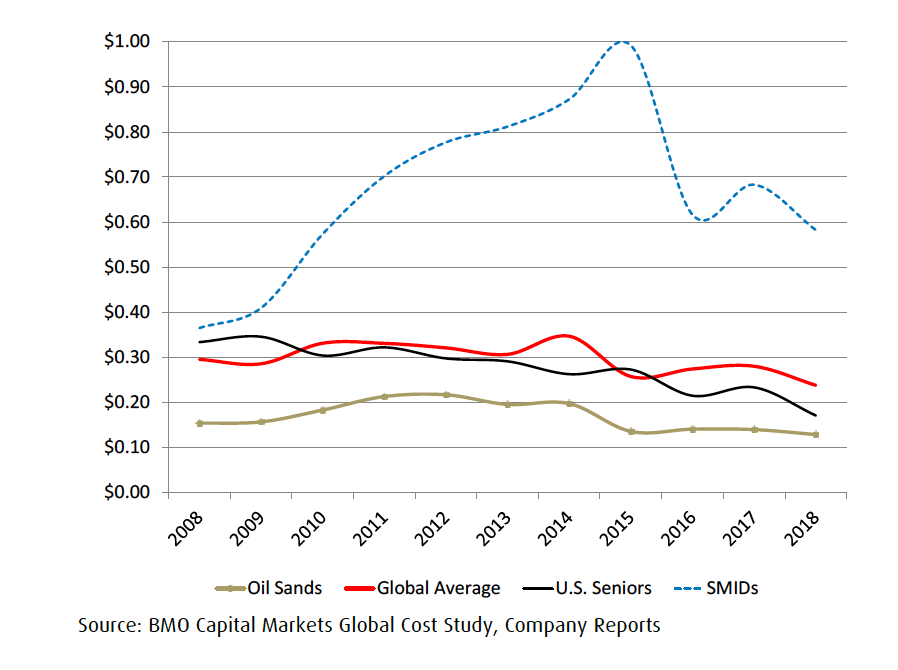 BMO reports that total oil sands cash costs have decreased more than 30 per cent since 2013/2014, in part due to deployment of technologies that reduce environ- mental impacts like water use, carbon emissions and physical footprint. 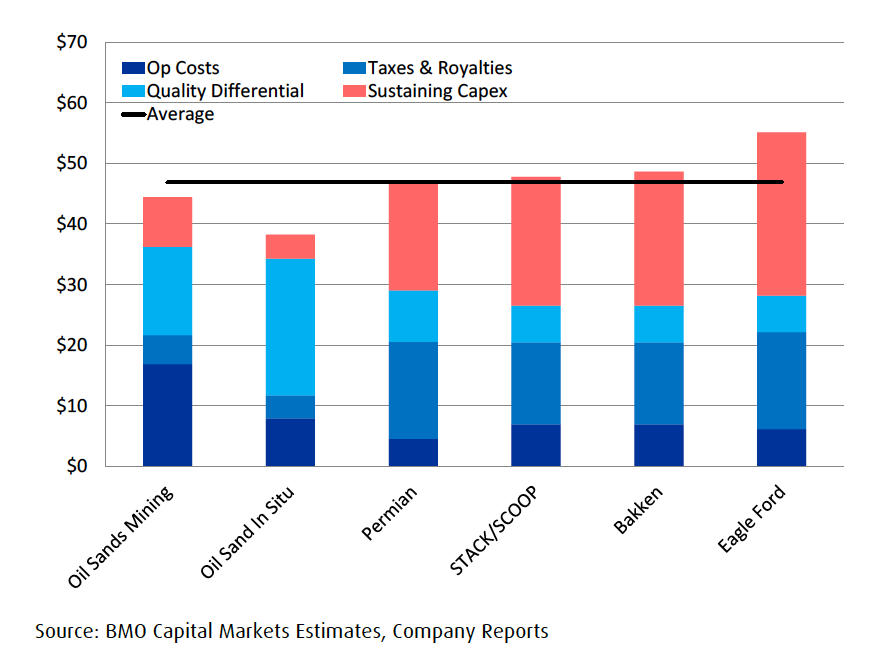