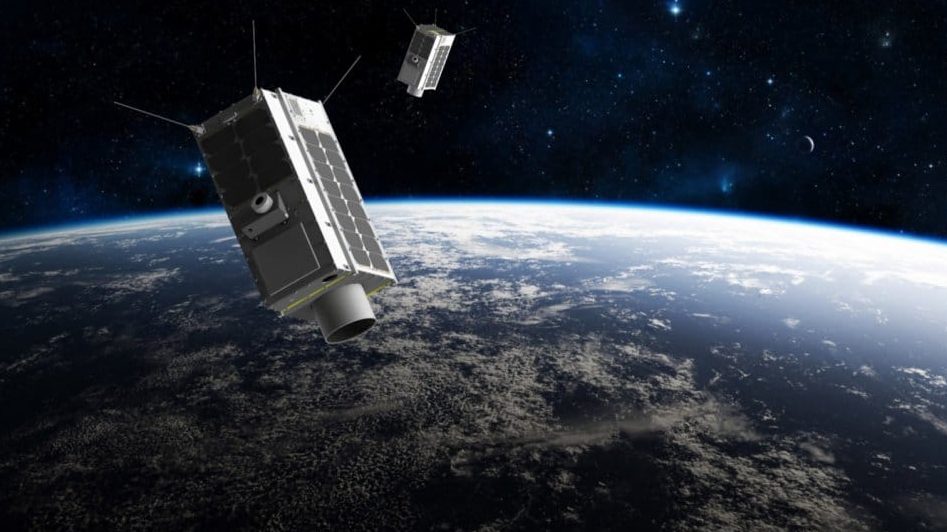 GHGSat-D, a satellite that monitors greenhouse gas emissions, is one of hundreds of technologies spearheaded by COSIA. Photograph courtesy GHGSat Inc.

From the nation’s energy heartland to Earth’s orbit, Canada’s Oil Sands Innovation Alliance (COSIA), made up of eight of the industry’s biggest players, is leading the charge to accelerate environmental improvement in the oilsands sector.

Since its launch in 2012, the partnership of companies that account for 90 per cent of production from the deposits has pooled 1,026 technologies that cost $1.4 billion to develop. Its goal is to improve performance in four priority areas: greenhouse gases, land, water and tailings.

The agency is now working on 294 projects, worth about $773 million in development costs.  Here’s a look at five of the most promising — both for the oil sands and for the world — in areas like GHG emission reduction, land reclamation and water treatment.

GHG eye in the sky 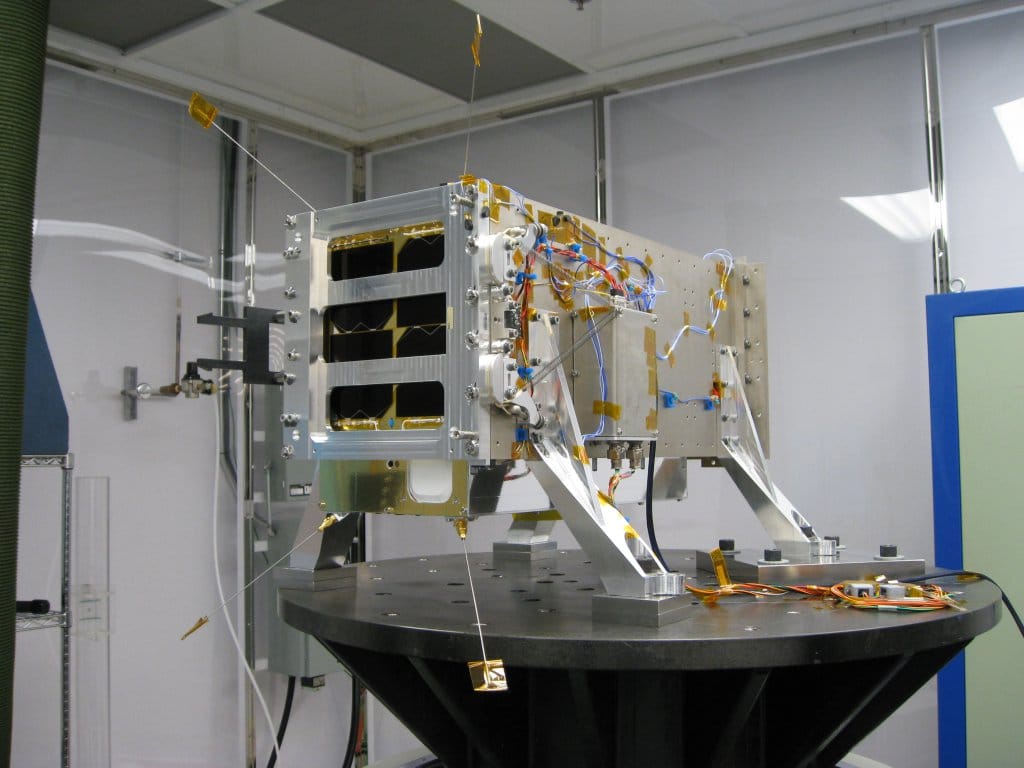 Her name is Claire.

She’s about the size of a microwave oven and she orbits the Earth some 15 times per day traveling at more than 7 kilometres per second.

Named after the young daughter of one of the project engineers, Claire, also known as GHGSat-D, took flight in 2016 thanks to a collaboration between COSIA, Suncor Energy Inc. and Montreal-based GHGSat Inc. According to GHGSat, Claire is the world’s first high-resolution satellite capable of measuring GHG emissions from industrial facilities.

Since 2016 the 15-kilogram satellite has been taking real-time measurements of carbon dioxide and methane emissions from not only oilsands operations, but coal mines, landfills and animal feedlots as well.

GHGSat president and CEO Stephane Germain says the applications for the orbital overseer are enormous and could help build fact-based strategies to curb global emissions. The company is currently crafting Claire’s siblings, Iris and Hugo.

“Certainly, the interest in measuring and monitoring greenhouse gas emissions has really ramped up in the last three years,” Germain says. “Innovation is critical to addressing greenhouse gases, not just in Canada, but the world.”

Since Claire took to the sky on India’s Polar Satellite Launch Vehicle, its monitoring potential has already seen some 50 clients sign on, eager to benefit from its valuable data.

It’s also proven its global worth after pinpointing a massive methane leak at the Korpezhe oil and gas field in Western Turkmenistan in early 2019. The field was billowing out approximately 5 million megatonnes of CO2 in just under a year, the equivalent amount of about one million cars on the road. Germain said Claire’s data was able to draw attention to the leak, which was ultimately capped. 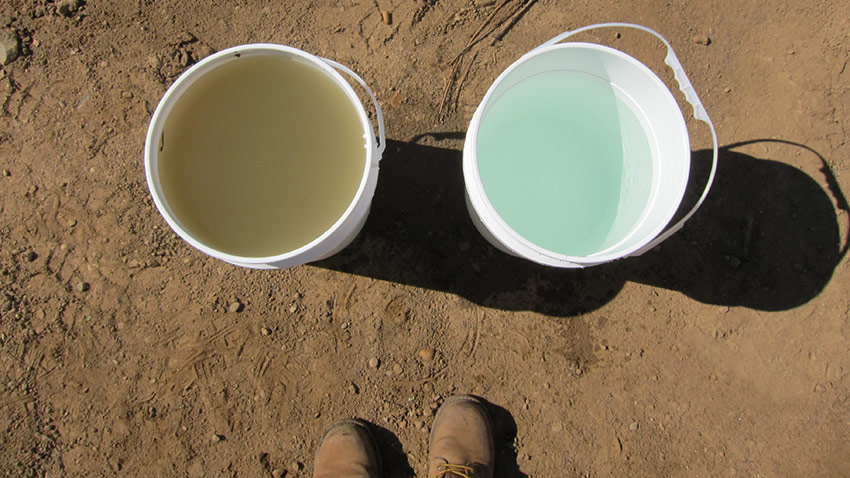 It’s been compared to an industrial-scale Brita water filter.

Using a common byproduct from the upgrading of bitumen, a carbon-rich solid material called petroleum coke, a Syncrude engineer pioneered a plan to use the material to treat and de-toxify tailings water, the result of the hot water treatment used to separate oil from sand and clay in oil sands mining operations.

Warren Zubot was working with Syncrude’s water recycling systems in 2005 when he “discovered” the potential of using the project’s stockpiled petroleum coke to replicate how home water filters use granular activated carbon to remove impurities. Given that that the petroleum coke byproduct is essentially pure carbon, Zubot wondered if the same concept was possible on a much larger scale.

In order to meet regulatory requirements, petroleum coke at Syncrude is mixed with water and stored in a settling basin. To initially test his theory, Zubot simply went out and sampled that water. He found significant reductions of toxins, and the project to develop the new water treatment technology began.

After years of laboratory study, a field pilot project was launched at Syncrude’s Mildred Lake site in 2012, which led last October to the completion of large pilot project at the same facility that will be able to put the theory to the test on a commercial scale.

An enormous filtration cell, about the length of three Canadian football fields with the width of another full field, water is treated to remove solids such as clays, hydrocarbons and dissolved organic compounds, including naphthenic acids.

The treated water is then pumped into a second pond – which is lined with a 50-millimetre thick geomembrane to prevent any water loss — where samples are taken to confirm they would be safe for release back into the environment.

There is currently zero release of mined oilsands process water allowed back into the Athabasca River. Based in part on analysis of the new Syncrude pilot as it goes forward, the governments of Alberta and Canada are developing regulations to allow for process water release, with 2023 set as the deadline for those rules.

Syncrude’s work using petroleum coke as a filter has produced water so clean and clear it supports fish species like rainbow trout.

While Syncrude is the only company to use fluid cokers, COSIA believes the research findings have the potential for the entire industry when it comes to safely returning treated water to the environment.

“This would be the first time in the industry’s 50-year history that a company was able to return treated tailings water to the river,” says John Brogly, COSIA Director, Water and Tailings. “That’s significant because it’s something everyone will eventually have to do.” 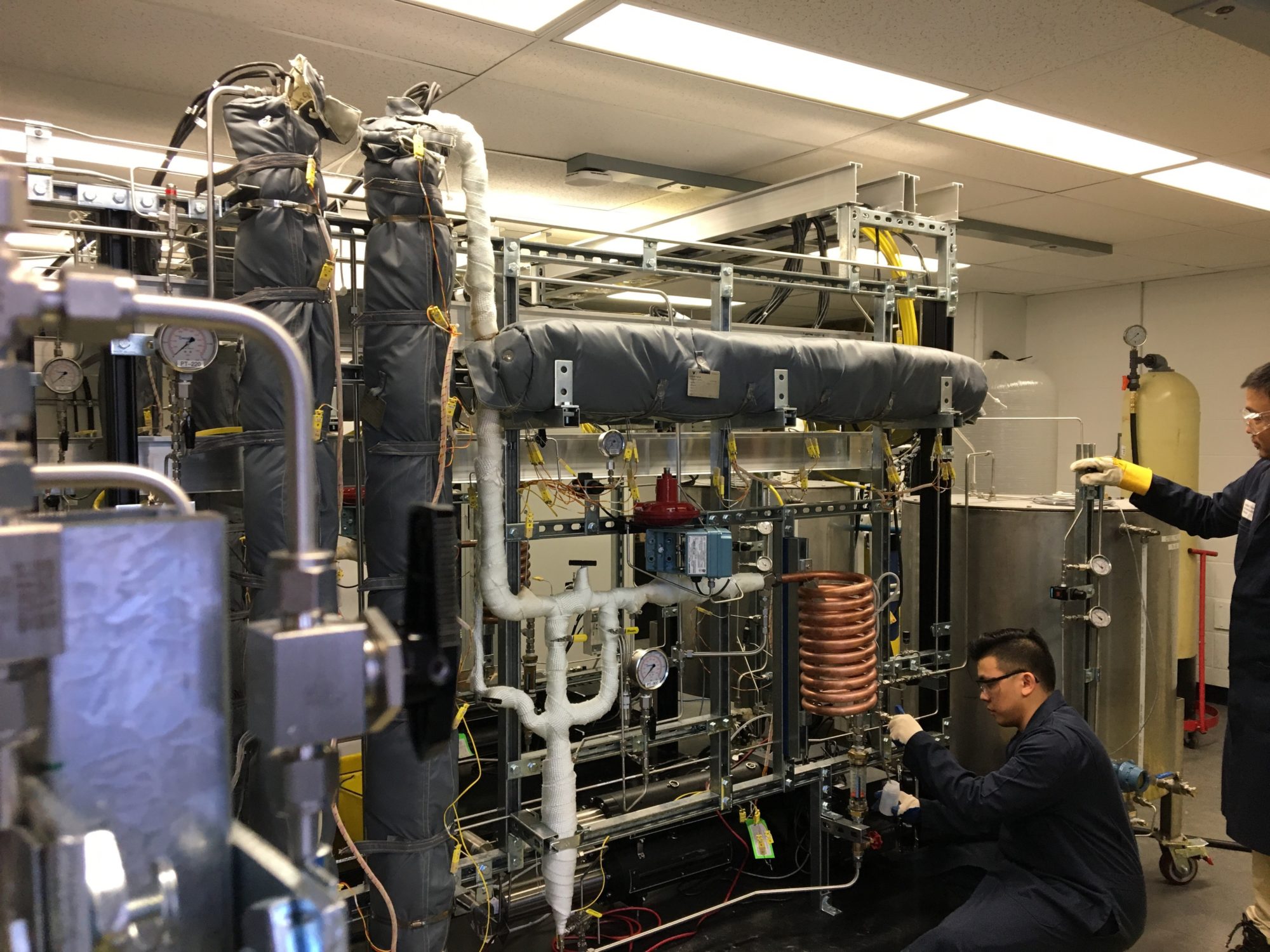 Just like a household kettle, water used in a once through steam generator (OTSG) to extract in-situ bitumen deposits is prone to fouling as a result of minerals building up on tube walls, which in some cases can force pricey production shutdowns.

Enter SAIT’s pair of 1/1,000-scale OTSG test units, developed and donated by ConocoPhillips in conjunction with COSIA and other partners, which replicate the function of full-sized OTSG facilities and are able to run experiments using the same parameters used in a field operation, including temperature and pressure conditions.

“The end goal is we want to find energy efficient solutions,” says Martez.

“If there’s fouling, how can we prevent and address it and ultimately get to a point where they’re burning less natural gas and reducing the use of water?”

While the primary focus of the model OTSGs is to address the ongoing issue of tube fouling, there are further applications to tackle another SAGD challenge: finding solutions to erosion and corrosion of steam generator pipes over time. 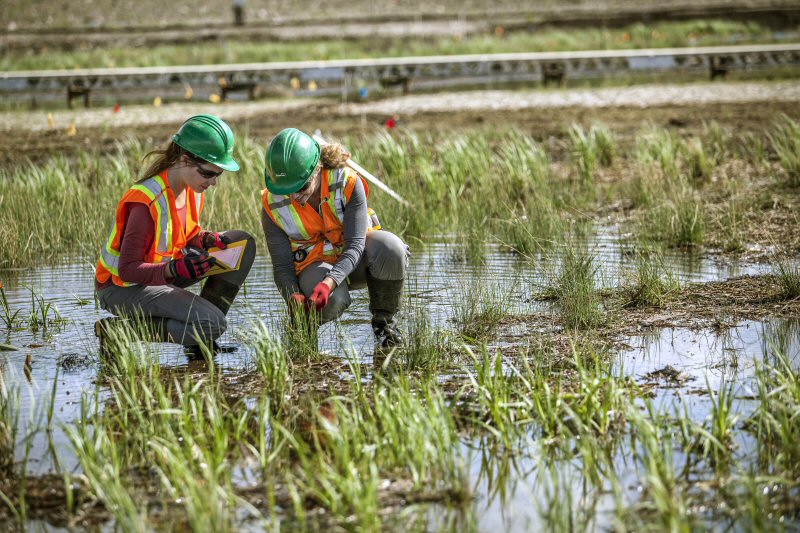 The Nikanotee fen is one of the first reclaimed fen wetland watersheds in the world. Photograph courtesy Suncor Energy

The Nikanotee fen is named after the Cree word for “future.”

Using 26 separate local plants species, the wetland is fed by groundwater rather than surface water like most marshes as well as materials available at the mine site, including tailings sand and petroleum coke.

Launched in 2013, the constructed wetland is under ongoing monitoring by researchers from five universities and colleges – Waterloo, Calgary, Colorado State, Wildfrid Laurier and Keyano – as well as Suncor staff to measure the project’s success creating a thriving and ultimately self-sustaining environment.

Already, the Nikanotee fen has begun accumulating peat, the spongy organic material commonly seen in muskeg and bogs, despite the commonly held belief that reconstructing such a landscape would be nearly impossible.

Fens are the most common wetland type in boreal forests, which surround Alberta’s oil sands operations, covering more than half of the landscape and acting as home to a huge variety of flora and fauna.

In nature, fens can take centuries or even millennia to form. They act as natural carbon sinks because of the accumulation of partially decaying vegetation and organic matter.

Given the early success of the Nikanotee fen, a second five-year research project has recently begun to replicate its success at multiple sites across the oil sands region. There will also be a focus on improving the stability of the fen by making it more biologically similar to natural fens. 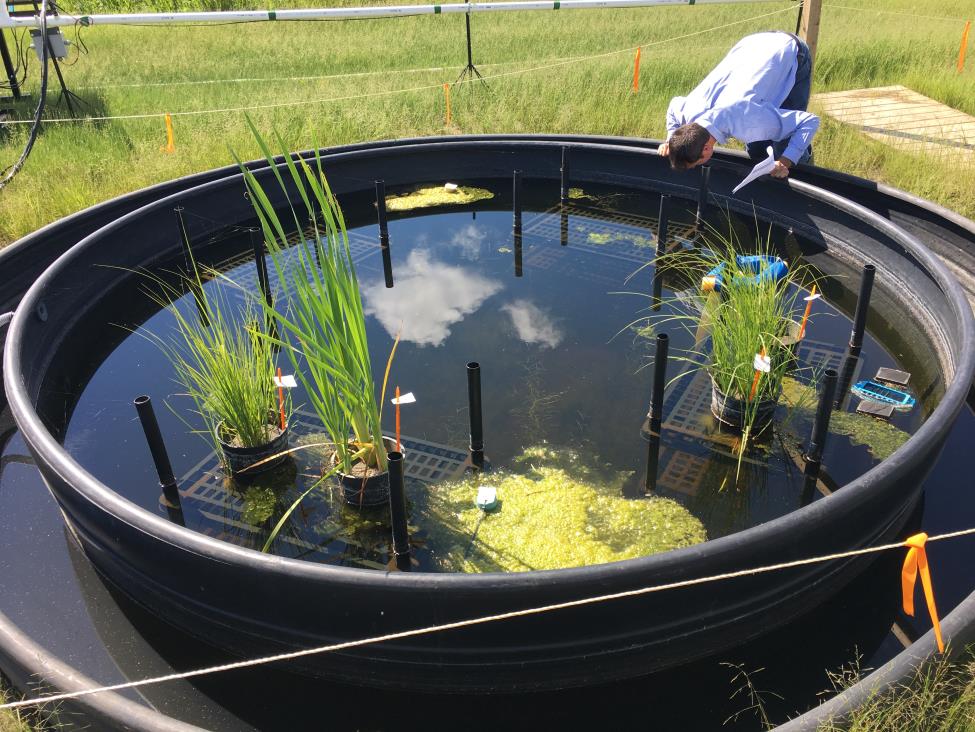 Water has incredible resilience and adaptability under the most severe conditions.

But even Mother Nature sometimes needs a helping hand, which is where the aquatic mesocosm test facility in Vegreville, Alta., comes in to play.

Picture a prairie field with row upon row of double-walled simulated lakes – thirty to be exact – that experiment with a variety of aquatic plants and micro-organisms to help reduce the toxicity of oil sands process water in order to create end pit lakes, a common mining reclamation system around the world that has yet to be commercialized in the oil sands sector.

“It is truly a world-class facility,” says Brian Eaton, the team lead on the project with InnoTech Alberta.

“The idea is you are trying to balance realism with control. So we’re able to take these thirty pools and divide them up with different treatments and controls. All of our experiments are two-year experiments.”

Each of the 30 mesocosms – which translates into ‘medium world’ as opposed to the smaller scale microcosm – is a 15,000 litre, double-walled tank that is open-topped and embedded in the ground to provide realistic thermal conditions. They run year-round to analyze the impact of weather changes on populations of invertebrates and aquatic plants. 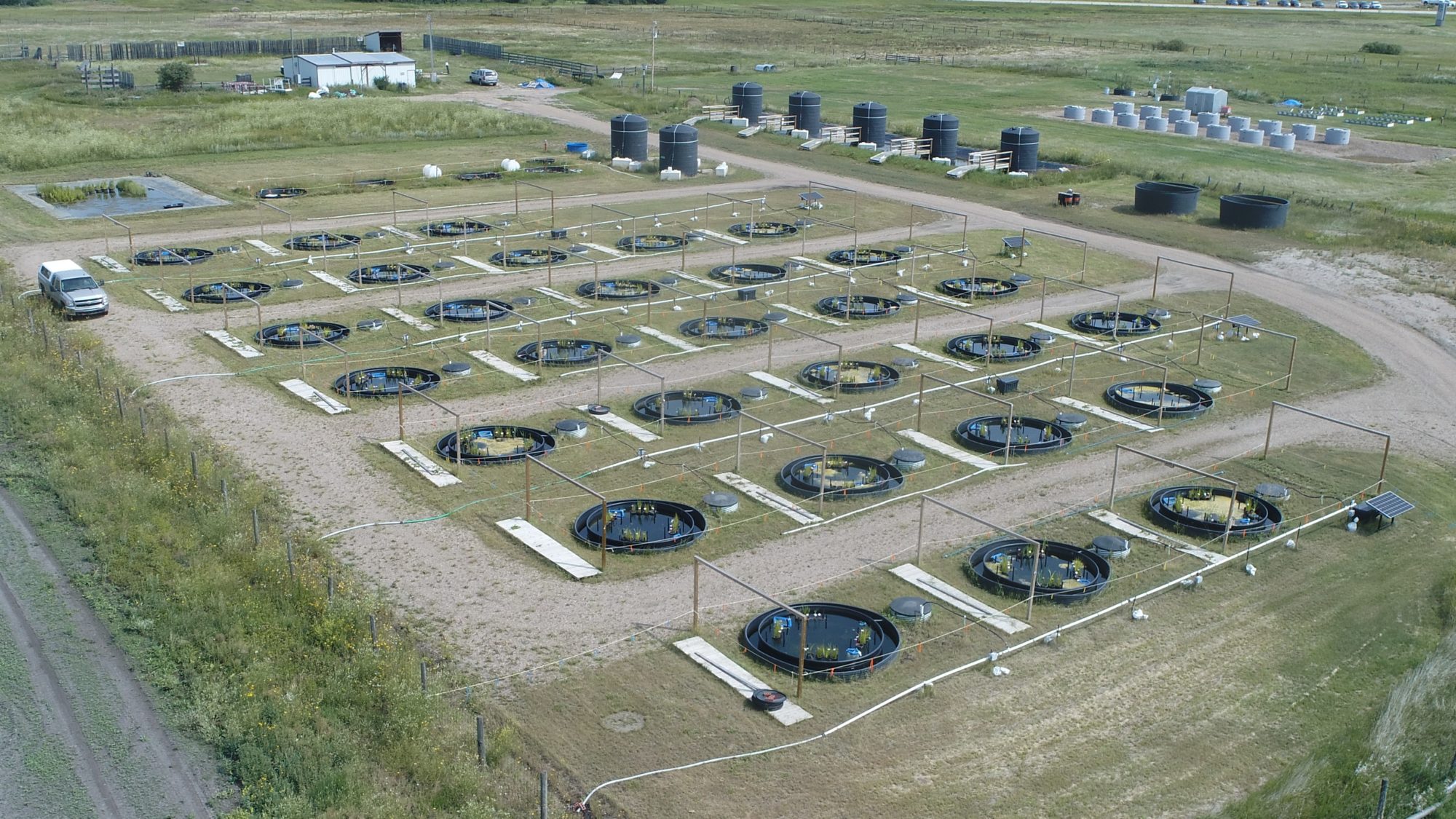 The research looks to determine whether flora such as rat root and sedge, or micro-organisms like zooplankton, can help decrease the toxicity of tailings.

Launched in 2017, Eaton said the applications could have a significant impact not only in oil sands operations, but for global mining operations.

“These things are so adaptable. We’re able to test out methods to treat OSPWs (oil sand process-affected waters) or tailings by putting in a number of plants native to that area,” Eaton says. “We’re taking care to make sure the statistical conclusions we come to are valid.”

Eaton says a report on the early findings of the facility will be released to the public.