Division remains over federal carbon tax, but most want to do more to meet 2030 emission reduction goal

September 5, 2019 – It is a debate often styled as “either or”. Either the federal government commits to policies aimed at reducing carbon emissions in order to meet international obligations to battle the effects of climate change or it focuses on growing Canada’s natural resource sector. But against the backdrop of a putative federal election call, Canadians are indicating they see the conversation not as “either or”, but “both, and”.

With both issues top of mind among persuadable voters, attention is turning to party platforms and expectations for the next government.

A new study from the non-profit Angus Reid Institute finds seven-in-ten Canadians (69%) say climate change should be a top priority for whichever party forms government after the October vote, including four-in-ten Conservative Party supporters.At the same time, six-in-ten (58%) say that oil and gas development should be a top priority alongside climate action.

While different Canadians may lean further to one side of the “economy-versus­-environment” discussion, in most cases this does not mean they’d ignore the other side completely. Among those who said the next federal government should prioritize climate change efforts, three-quarters (75%) want at least some investment in the oil and gas sector. And among those who say the energy industry should have the next government’s main focus, four-in-five (80%) would still wish to see at least some investment in climate change efforts.

Asked which party is best to lead Canada on the climate issue, the Conservative Party, bolstered by its own loyal vote base, is viewed as best by 25 per cent. About the same number give the advantage to the Green Party (23%), while others are divided between the incumbent Liberals (18%), the New Democrats (10%) and uncertainty (18%). 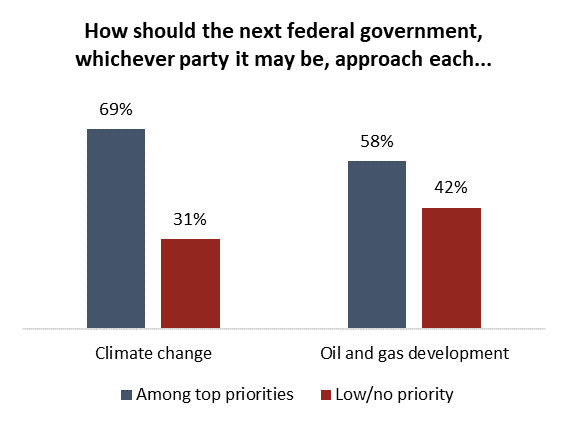 Read the rest of the story here: www.angusreid.org/election-2019-climate-change

What Does it Take to Build Successful Blockchain Ecosystem? – Koleya Karringten