Just half of Liberal voters want to see party form a majority; 81% of CPC voters say same of their party

September 2, 2021 – Canadians are bearing witness to the roller coaster ride that has been the first weeks of the 44th federal election. A comfortable advantage for the incumbent Liberals has vanished, while the Conservative party picked up support driven by its leader’s surging momentum.

Regardless of how they vote, however, Canadians – at least at this stage in the campaign – say they largely expect an election outcome that mirrors the way government looked when the writs were dropped Aug. 15.

New data from the non-profit Angus Reid Institute finds half of Canadians (49%) saying they anticipate another Liberal minority government. Another one-in-nine (12%) say that they expect the Liberals to turn it around and win a majority. Just one-in-three (34%) expect a Conservative government in any form.

That’s not necessarily what Canadians want, however.

Asked what form of government they would prefer if they could choose, the largest group – 42 per cent – would like to see the CPC take over from the Liberals, whether in majority (32%) or minority (10%) composition. Three-in-ten (31%) would like the Liberal Party to govern again, divided evenly between hoping for a majority or minority, while slightly fewer (27%) want Jagmeet Singh as prime minister, and the NDP as the government. 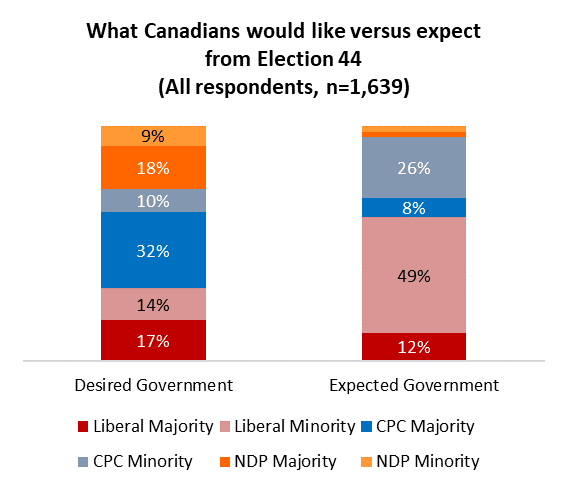 BC’s LNG era is far from over. Those seeking its demise would have better luck finding the Holy Grail.