Summary: The Government of Alberta is committed to attracting new investment every year worth billions of dollars.

That’s why it promised to cut taxes on investment and operations in Alberta by cutting the corporate income tax on July 1, 2019, and is scheduling further annual decreases until 2022. In designing its new corporate tax policy, the new Alberta government took into account Canada’s lagging competitiveness, the stimulative effect of business tax relief, the need to create new jobs and to diversify the economy.

The details: As of July 1, 2019, Alberta reduced its corporate income tax rate to 11% from 12% (Figures 1 and Figure 2), making its corporate tax rate the lowest of any province in Canada. Further, Alberta will have an even more significant advantage for investment when the Job Creation Tax Cut is fully implemented in 2022. 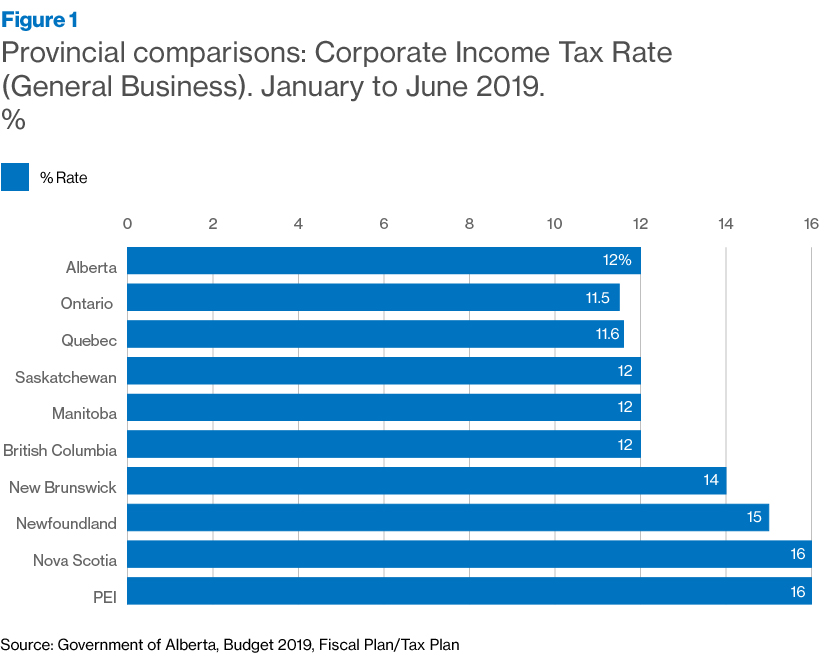 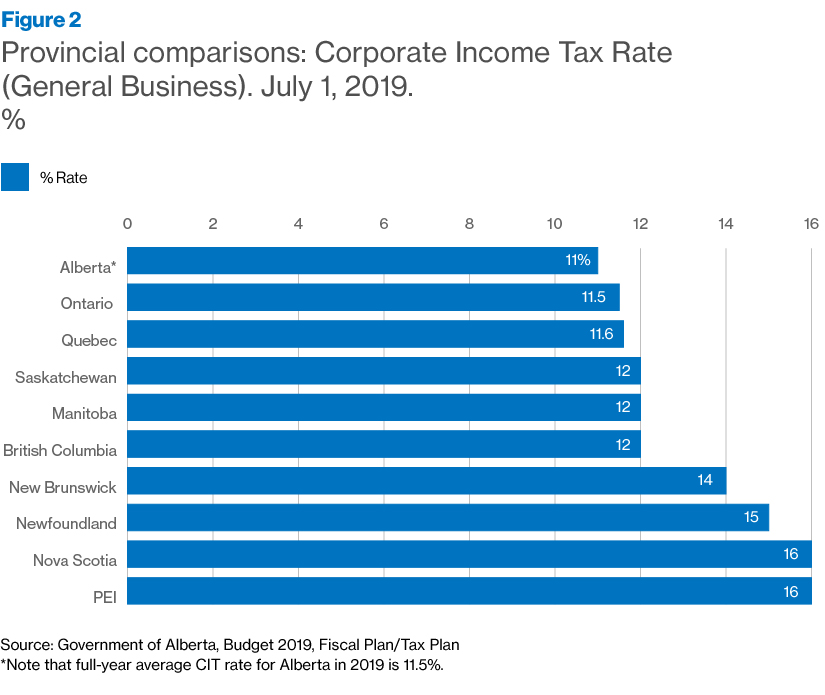 By 2022, Alberta’s provincial corporate tax rate of 8.0% will be 30% lower than the next-lowest announced provincial rate (Ontario), one-third that of neighbouring British Columbia, and one-half that of Nova Scotia and Prince Edward Island (Figure 3). As of 2022, the combined Alberta/federal corporate income rate will be 23% (Figure 4), again, the lowest of any province in Canada. 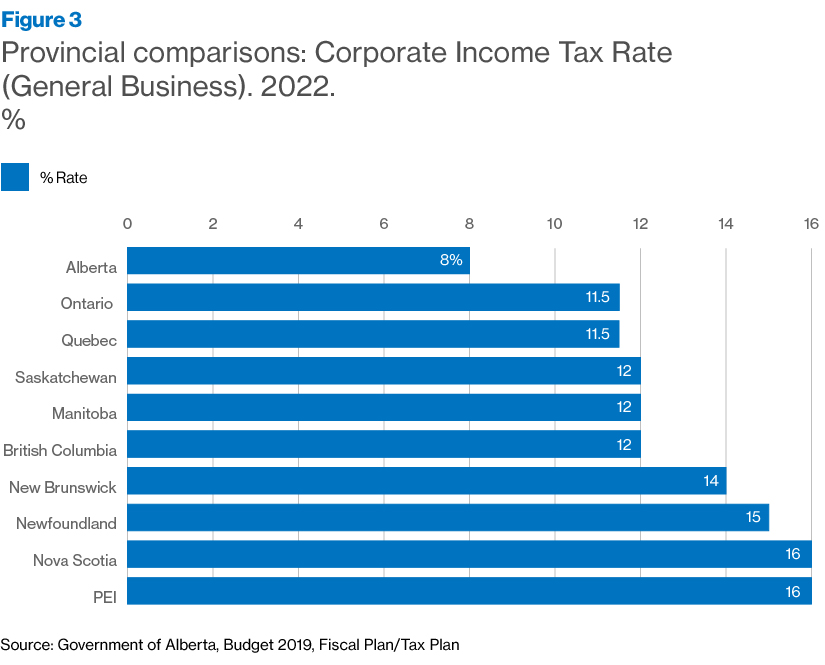 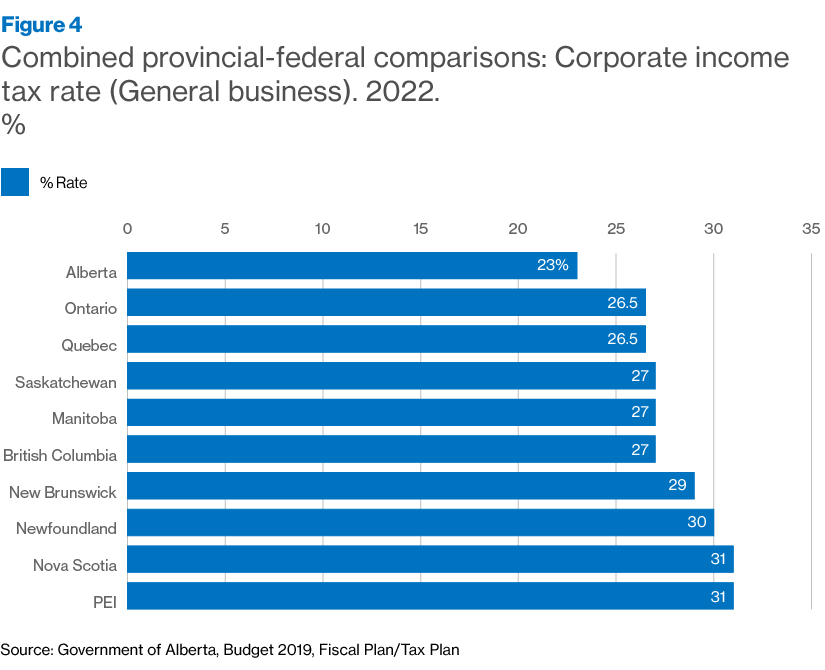 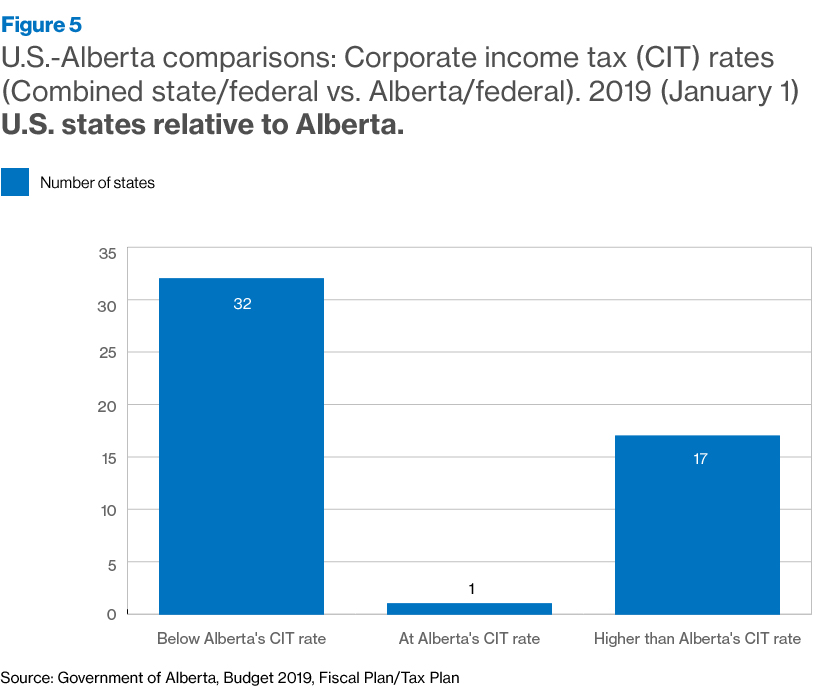 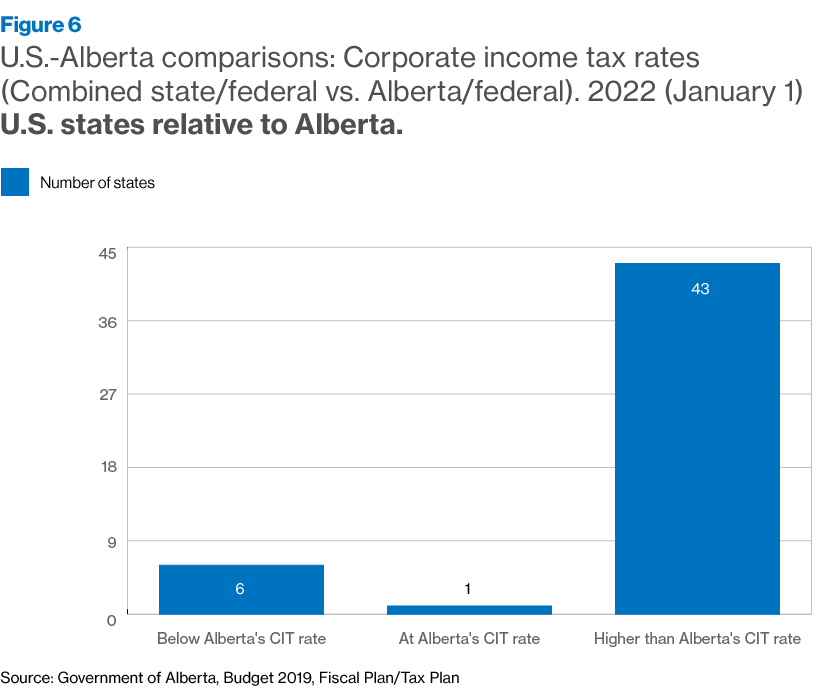 Corporate tax reductions have been found to be effective in boosting economic growth and employment creation, while the opposite policy hampers growth and the potential for new employment. The new government’s taxation policy is based on work by economist Dr. Bev Dahlby, from the University of Calgary’s School of Public Policy, and economist Dr. Jack Mintz, the founder of the School of Public Policy, both experts in the field of taxation and effects upon economies. The work of Dr. Dahlby and Dr. Mintz anchored the new government’s taxation policy.

That report served as the basis for business tax reform starting in 2000 under the Liberal government of Prime Minister Jean Chretien, which reduced both personal and business taxes in Canada over a series of years, including a reduction in the federal corporate tax rate to 21%, from 28%.

Relative to Alberta, they estimated that a 1% reduction in the provincial corporate income tax rate would boost a province’s economic growth by 0.12% four years after the initial corporate tax rate reduction and increase real per capita GDP by 1.2% in the long run.

“This reduction in long-run total revenues is only 25% of the so-called ‘mechanical effect,’ which is the revenue loss calculated from multiplying the tax rate reduction by the average CIT revenue per tax point,” they wrote in the paper. “Thus, the expansion of the economy and the corporate tax base substantially offsets the loss of tax revenue in the long run from the CIT rate cut. While a $350-million reduction in revenues is significant, it is small in the context of the $6.7 billion 2018-2019 deficit.”

Ottawa’s consultation with Indigenous groups on pipeline was meaningful: Lawyer