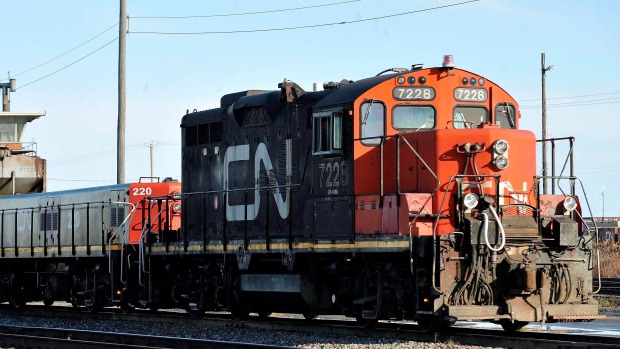 MONTREAL — About 3,200 Canadian National Railway conductors, trainpersons and yard workers are on strike after the union and company failed to reach a deal by the midnight deadline.

The Teamsters Canada Rail Conference, the union representing the employees, gave the required 72-hour strike notice on the weekend.

Union spokesman Christopher Monette says they are still in talks with CN in hopes of reaching a negotiated settlement and ending the labour dispute as soon as possible.

The union has said passenger rail services in the country’s three biggest cities would not be affected by the strike.

It represents workers at commuter rail services including Go Transit in Toronto, Exo in Montreal and the West Coast Express in Vancouver, where passengers would remain unaffected.

The workers, who have been without a contract since July 23, say they’re concerned about long hours, fatigue and what they consider dangerous working conditions.

The dispute comes as CN confirmed Friday that it was cutting jobs across the railway as it deals with a weakening North American economy that has eroded demand.

This report by The Canadian Press was first published Nov. 19, 2019.