August 13, 2019, CALGARY, AB – Alberta’s push to diversify its economy just got a major boost with a new female-led partnership in an emerging technology sector. The Alberta Blockchain Consortium (ABC) is pleased to announce a new partnership with the Canadian Blockchain Association for Women (CBAW). The organizations will be announcing the vision behind their collaboration during Alberta Blockchain Week at CBAW’s Deloitte-sponsored event. 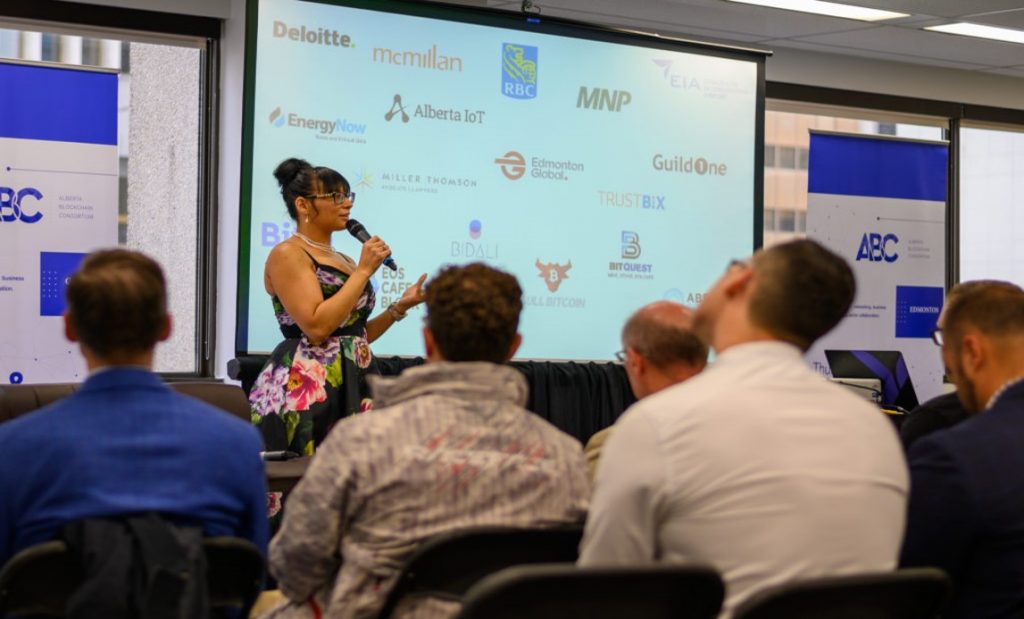 Blockchain is a type of decentralized database that helps participants exchange data without third party intermediaries; the blockchain industry has expanded rapidly over the last decade.

The ABC and other organizations have been steadily working to raise awareness of blockchain technology’s ability to help transform some of Alberta’s – and Canada’s – biggest challenges, including agricultural trade disputes, systemic bureaucracy and red tape, costly inefficiencies in the oil & gas industry, and the need to build fairness and trust in Indigenous relations. ABC’s new partnership brings opportunities for raising awareness of these important issues, and for demonstrating the potential for women to play key roles in this largely male-dominated industry.

Known internationally for its oil & gas innovations, Alberta has recently created ground-breaking developments in blockchain technology applications for industries like energy, agriculture and finance. The province’s blockchain prowess will be on full display during Alberta Blockchain Week from September 9th – 13th. Alberta Blockchain Week will be an internationally attended showcase for the province’s innovative organizations, companies and exciting new blockchain applications.

Technology entrepreneur and Absolute Combustion CEO Koleya Karringten heads the ABC. Karringten united virtually all of Alberta’s blockchain organizations under a single ABC umbrella and engages strongly in advocacy and ecosystem support. The ABC is heavily backed by industry and government, with representation from RBC, McMillan LLP, MNP, Edmonton Global, Edmonton International Airport, Deloitte, Miller Thomson LLP, and Guild One on its board.

“I truly believe that Alberta is globally unique for the strong female representation in our blockchain industry”, said the ABC Executive Director. “Not only do we have women at the head of every single blockchain ecosystem organization, but incredible diversity inside of our successful technology companies. A major study by the McKinsey Global Institute put an extra $150 billion in GDP growth by just 2026 if Canada’s gender gap was corrected, and organizations like ours need support to keep moving the dial forward on women in technology.”

Janine Moir, the National Blockchain Assurance Leader for Deloitte, has spent much of her career promoting the benefits of inclusivity in the technology industry through leadership in groups like #MovetheDial. A board member of the ABC and co-founder of CBAW, she believes that “Blockchain has the power to transform the business fabric of our province and country.  A transformational technology like blockchain needs diversity to ensure everyone has a seat at the table for this transformation.”

CBAW Executive Director and technology consultant Alexis Pappas said that her organization believes that blockchain has a crucial role to play in Canada’s shift to a more innovative and internationally competitive digital economy – but that people from all backgrounds need to participate in that evolution. “Changes of this scale require a diversity of voices, or they simply won’t benefit everyone,” she said. “And it’s important to recognize that many of the advantages of blockchain technologies – like the ability to reduce administrative costs – will also impact jobs that are disproportionately held by women and underrepresented groups.”

CBAW’s Blockchain Week event on September 10th will be hosted at Deloitte’s Calgary headquarters, where the group will formally announce its partnerships and new project. A key part the organization’s mission is to raise awareness of the impacts – including both opportunities and challenges – that Canada’s increasing adoption of technologies like blockchain may have on disenfranchised groups.

The ABC and CBAW, together with Blockchain for Indigenous Rights International (BIRI), are working together to launch a new project designed to overcome the disparities in technology education and employment. The project, called ‘Building Blocks’, will provide tools and educational programs to youth in Alberta’s Indigenous communities, including digital literacy skills, basic coding, and an important understanding of the dramatic changes occurring in Canada’s employment market.

Canada has recently slid in global innovation rankings and has significant economic and social hurdles to keeping pace with the rest of the world. According to the 2017 report by the Brookfield Institute, just 3% of Information and Communications Technology graduates are of Indigenous heritage, and women have stabilized at less than 25% of the technology workforce. In the blockchain industry, a landmark American study by Longhash.com placed female participation at 14% of company membership, and 7% of leadership.

As blockchain can be a force for inclusiveness, the ABC believes that it is important to get a diverse range of people involved in running the organizations and community surrounding the blockchain industry. By encouraging women to get involved in the business of blockchain technology, Canada can begin to access part of the untapped potential $150 billion in GDP growth that will be vital to support the country’s people, environment and national economy.

“We believe that blockchain technologies are a critical piece of the puzzle for overcoming our province’s social and economic challenges, and support for our industry will help Alberta lead the world when it comes to building an inclusive digital future”, said Koleya Karringten. “Alberta Blockchain Week, backed by our incredible corporate and ecosystem supporters like Deloitte, will help show the world that technology innovation is a true ‘Alberta Advantage’.”

Visit to learn more and register for the Alberta Blockchain Summit and other events: https://www.eventbrite.ca/e/alberta-blockchain-summit-tickets-61411266752

Industry Support for the ABC:

“The Alberta Blockchain Consortium is a fantastic organization, and one that I am proud that Miller Thomson became corporate member of. It’s because of organizations like this and initiatives like ‘Building Blocks’ that will put Alberta on the map at a global scale for blockchain innovation and ecosystem development.”

“These initiatives are prime examples of regional collaboration to diversify our growing economy and move investment in new technologies to the next level. When we amplify all voices by creating inclusive programs and events, we all succeed.”

“Blockchain has the power to bring fundamental change to numerous industries including almost every aspect of airports. Edmonton International Airport sees the potential of this technology and we need to embrace this future. In a global marketplace we must be at least as efficient as our competition at every step. Blockchain can make us that and we’re proud to be a member of the Consortium.”