Subdued optimism is probably the best description of the overall mood of the Canadian oilfield service sector in early 2018.

Higher oil prices have given some companies confidence to begin investing but that sentiment is being tempered by increasing volatility in gas markets, which is keeping a tight lid on overall capital investments. As a result, industry activity in Canada is expected to remain fairly flat in 2018, with similar or fewer drilling days than in 2017.

In this environment, here are the top five trends noted by service companies and representative associations during the first quarter of the year.

Late in November and in early December 2017, the effect of a deteriorating natural gas market and higher differentials due to tight pipeline capacity began to delay the start of winter drilling programs or cause reductions in levels of activity that were previously anticipated. 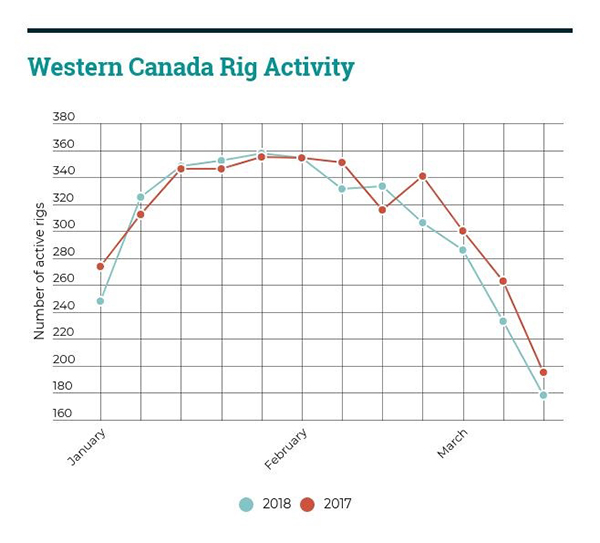 On Feb. 1, the Petroleum Services Association of Canada (PSAC) updated its 2018 drilling forecast — which was originally released in October 2017 — and lowered its rig release estimate for the year by 300 wells.

PSAC now says 7,600 wells will be drilled across the country this year, down four percent from the original forecast.

“As long as our products are essentially landlocked and restricted to just one customer, a full recovery for activity levels for the Canadian oil and gas industry will be negatively impacted,” said outgoing association president and CEO Mark Salkeld

“Investment dollars are fleeing Canada for regions of the world offering a more competitive environment for investment and where there is greater confidence in getting projects approved and completed.”

Also influencing well counts is a shift from many wells drilled to fewer wells that are far deeper and more productive, says PSAC.

Over the first two months of 2018, the average length of wells drilled in Western Canada rose to a record 2,808 meters (excluding experimental wells), up from an average 2,602 meters in January-February 2017.

The Montney is the most active projected zone targeted by operators so far in 2018, focusing on a subset of wells drilled 3,000 meters or longer.

According to Daily Oil Bulletin data, of those wells drilled 3,000-plus meters, a total of 202 wells have been spud with the Montney listed as the projected zone to mid-March, for a total meterage tally of 997,490 meters.

Diversification remains a hot topic within the industry, with several drilling and service companies announcing plans in the first quarter to move equipment south of the border.

The Permian Basin remains a focus of U.S. activity.

In December 2017, AKITA Drilling Ltd. moved a state-of-the-art rig into Odessa, Texas, where day rates rose during the past year.

For 2018, Trinidad Drilling Ltd. is redeploying eight rigs to the Permian, including two from the Canadian market, as well as three from Saudi Arabia and three from less active areas within the United States. The moves will boost Trinidad’s U.S. fleet to 69 rigs compared with 68 in Canada.

While day rates have remained firm in Canada through the winter drilling season, according to Trinidad, the upward momentum seen in the U.S. is not occurring to the same extent in the Canadian space.

“In the Canadian space, everyone is going to be real tight to make things work economically, so they will be very selective on what they will do — that’s what I think is going to happen,” Brent Conway, president and chief executive officer of Trinidad, told the company’s fourth-quarter conference call. “There is a dynamic there that is still pretty challenging for a Canadian E&P producer.”

In a survey conducted by JWN Energy in late 2017 and early 2018, respondents from the service and supply industry said they are looking to the U.S. as the number one potential export market, with Central and South America trailing behind as top destinations.

In the Montney and the Duvernay, more companies are moving into “manufacturing mode,” with well-capitalized operators now entering into contracts that provide them with certainty of supply for services, including frac sand.

In this month’s conference call to discuss fourth quarter results, Source Energy Services Ltd. said most of its frac sand sales are now secured under long-term contracts and management believes these contracts will continue to underpin the company’s business as more customers move into manufacturing mode.

Earlier this month, Source entered into an agreement with a large customer to extend the term of an existing contract. With a prepayment from the customer accompanying a long-term commitment to acquire a substantial percentage of Northern White frac sand from Source, management says this deal demonstrates how the industry has evolved to ensure customers have a reliable frac sand supply to support growing proppant needs.

A year ago, according to Brad Thomson, president and chief executive of Source, contracts were basically “best-effort” commitments that did not contain “a lot of teeth in them,” given the industry environment at the time. Currently, however, he says companies are more receptive to enter pre-pay arrangements, as well as take-or-pays.

“Those contracts are back in vogue. People are using those as a way to differentiate themselves and to secure supply,” Thomson says.

In the JWN survey, 42 percent of respondents said the industry is currently in a state of technology disruption that is fundamentally changing the way the sector operates. The top two approaches they are taking to deal with this disruption is by using to data to drive their innovation programs and by creating a safe environment within their operations for employees to innovate.

While there have been many stories in the media about service companies not being able to generate a return on investment on technology innovation, the survey results told a different story. Sixty-two percent of respondents said they were “very successful” or “somewhat successful” in capturing the value of productivity improvements through technology or process changes with their customers. Another 19 percent said they captured part of the investment.

Several service companies are currently working on technology advances to allow them to participate more fully in the extended-reach wellbore market, with a focus on high-performance motors, MWD systems and automation. MNP understands the oilfield services industry – its drivers, challenges and opportunities. We are proud to provide insight into the latest industry news and trends in our newsletter, issued in association with JuneWarren-Nickle’s Energy Group.

Save the Date: CAOEC State of the Industry on November 23
INDUSTRY PANEL: Oil Sands Community Alliance’s Workforce Trends in The Oil Sands Industry – October 21, 2021 at 10:00 am MDT
Preliminary Notice! Next Tuesday, Century Auctions & ClubBid.com will be opening their Absolute Public Online Fort Saskatchewan Consignment Auction Featuring a Major Realignment for Ralph Morrison Rentals and Others!
“Diversity is who you are. Inclusion is what you do.”- The Wrokforce Forward Summit: November 30, 2021