This Fact Sheet (which can be downloaded here as a pdf) compares Canada and the United States on pipelines built from 2014 to 2020 and offers an international comparison on pipelines under construction as of early 2020. In both comparisons, the data are clear: development in Canada has stagnated while the rest of the world expands.

This lack of new capacity growth in Canada not only has dampened the benefits of investment in pipelines (creating jobs and incomes). It also restricts both the volume of exports and the price Canadian-based companies receive for oil and gas exports. In addition, the stagnation of pipeline construction has led to foregone government revenues in the tens of billions of dollars. Meanwhile, other countries have continued to see significant investment in pipeline construction, with a concurrent rise in oil and gas exports.

The Coronavirus pandemic has affected worldwide demand for oil and natural gas. However, historical trends are useful to place the current demand downturn in perspective. Data available back to the early 1970s for oil (Table 1) show that world oil consumption initially slumped in periods of recession, but post-recession resumed and increased ever higher. 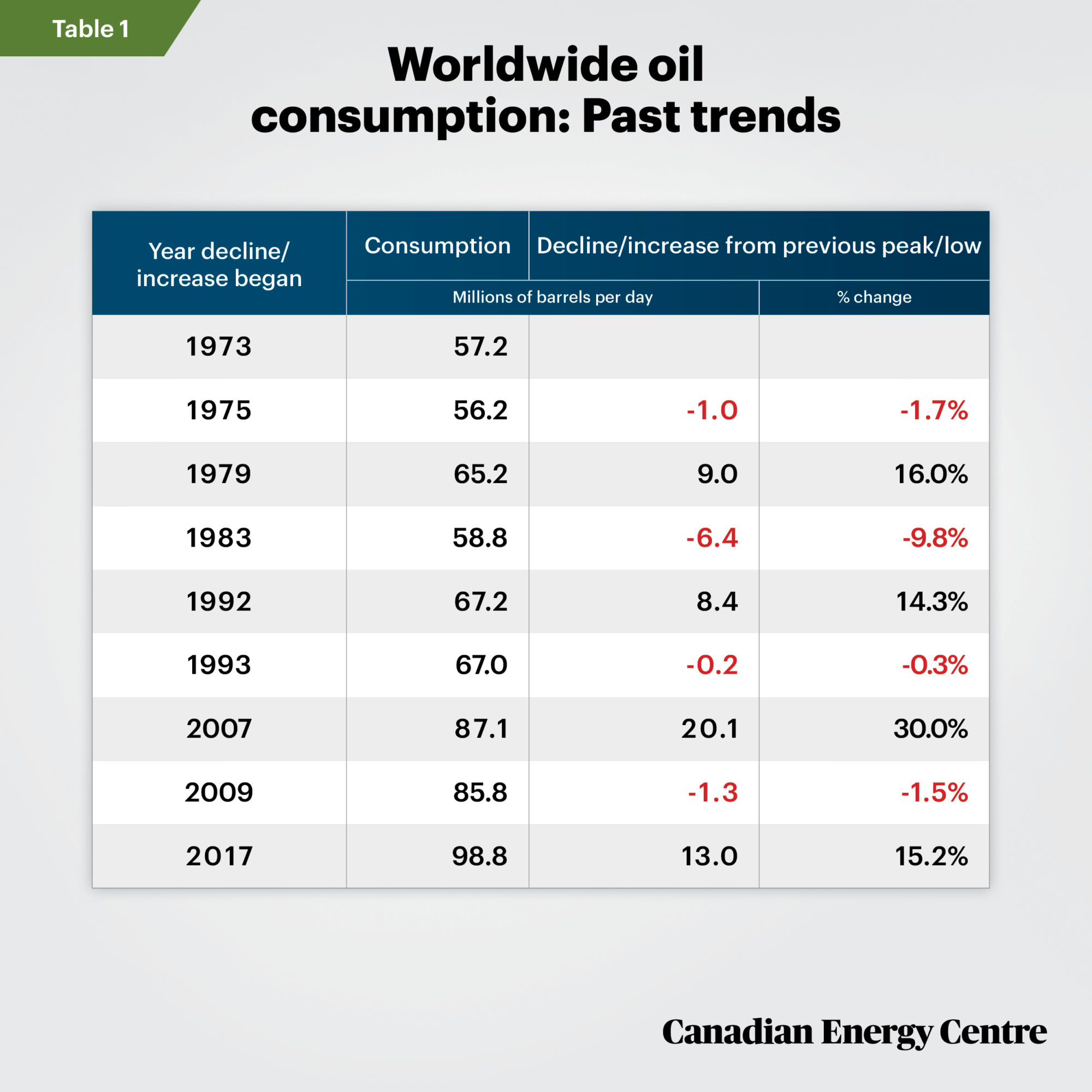 For natural gas (with data available since 2000), world consumption declined only during the 2008/09 recession, and then resumed its upward trajectory.

There is no guarantee that past demand trends for oil and natural gas will repeat themselves in the future. Current estimates from the International Energy Agency (IEA) are that worldwide petroleum consumption could decline by nine per cent in 2020 (by 9.3 million barrels per day) compared with 2019 levels. The IEA expects oil demand to recover gradually in the second half of the year, nearing pre-pandemic levels by December. The IEA notes that natural gas demand could decline year-over-year by five per cent or just 2.7 per cent should the Coronavirus lockdowns end earlier than expected.

In its recent forecast, the IEA did not offer a 2021 demand outlook for oil or natural gas. However, the U.S. Energy Information Administration currently forecasts a recovery in oil demand, worldwide, of 6.4 million barrels in 2021 or a 6.7 per cent increase relative to 2020. On natural gas, the U.S. Energy Information Administration does not offer a worldwide forecast for 2021, but it expects domestic natural gas consumption to fall further, with a total decline from 2019 to 2021 of 3.7 per cent.

Figure 1: Oil and natural gas pipelines built between 2014 to 2020, Canada and the United States

With that context in mind, Figure 1 shows data on pipeline completion from 2014 to 2020 in Canada and the United States. (Data on total pipeline construction completed worldwide for those years is not available.)¹ 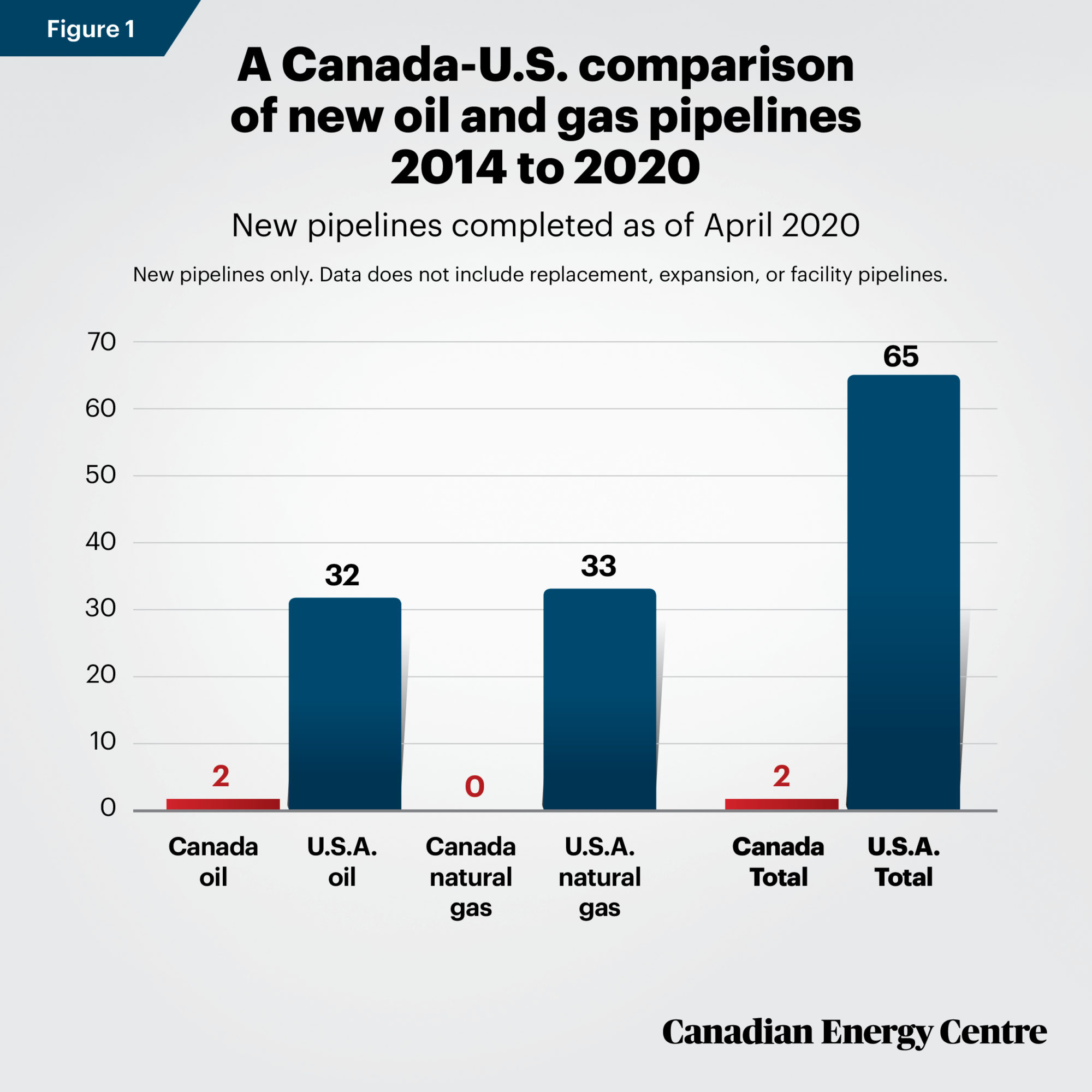 Figure 2: Oil and natural gas pipelines under construction in early 2020

Similar to the Canada-U.S. comparison, the rest of the world has continued to plan and construct oil and natural gas pipelines while activity in Canada has stagnated. As of February 2020, there were nearly 50,000 miles of oil and natural gas pipelines under construction worldwide: Canada’s share was just under 2,000 miles or four per cent, compared with more than 37,000 miles, or over 75 per cent of activity, in the United States and Asia-Pacific region combined. 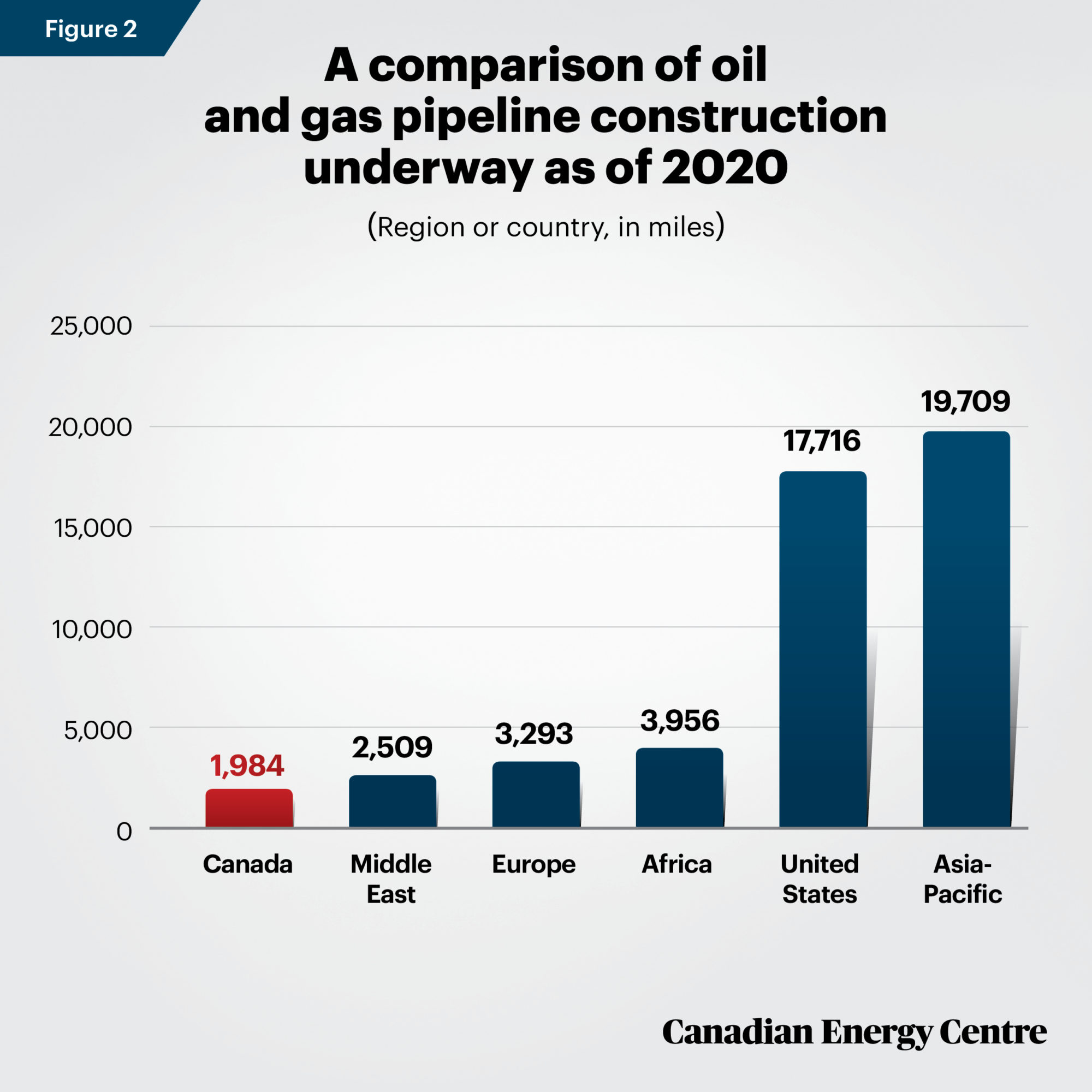 Oil: While Canadian oil exports have risen in recent years, the lack of increased pipeline capacity has exacerbated “differentials” in pricing, i.e., a lower price for Western Canadian Select (WCS) compared to West Texas Intermediate (WTI). The difference in price reflects the heavier quality of WCS relative to WTI, and the additional costs associated with transportation to U.S. refining hubs. Wider discounts have occurred in recent years as pipeline constraints have prevented Canada from transporting additional oil to markets in the United States and Asia.

In a 2019 policy brief from the University of Calgary’s School of Public Policy, authors Tim Hearn and Robert Mansell estimated that Alberta alone lost $40 billion in revenue since 2013 due to the pipeline challenge. The Government of Alberta estimates that without new pipeline export capacity—some of which is now underway but could yet be stalled—Canadian producers and governments would forego more than $43 billion in lost income by 2023, or almost $9 billion per year. The lost income would translate into the loss of about 35,000 jobs per year across Canada. 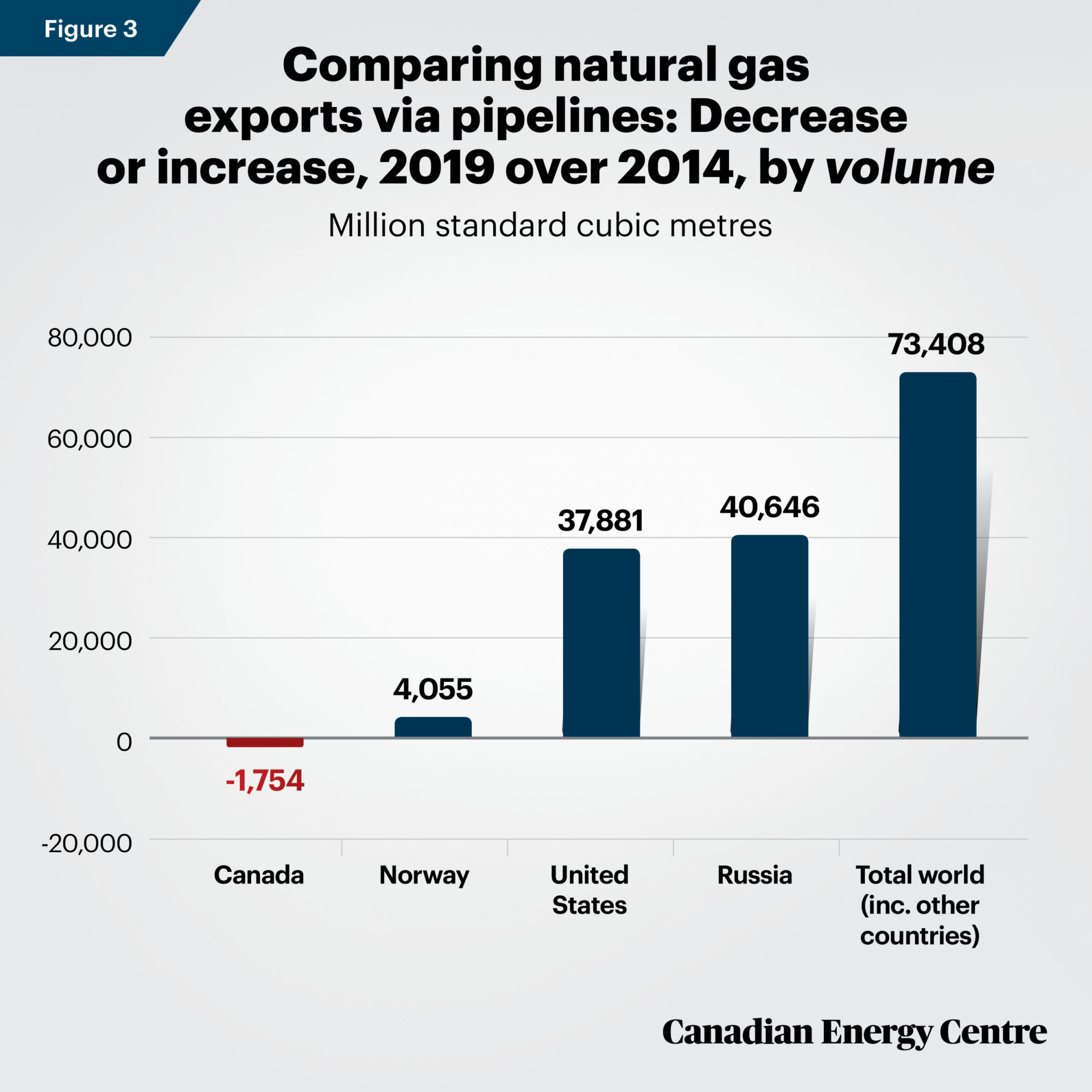 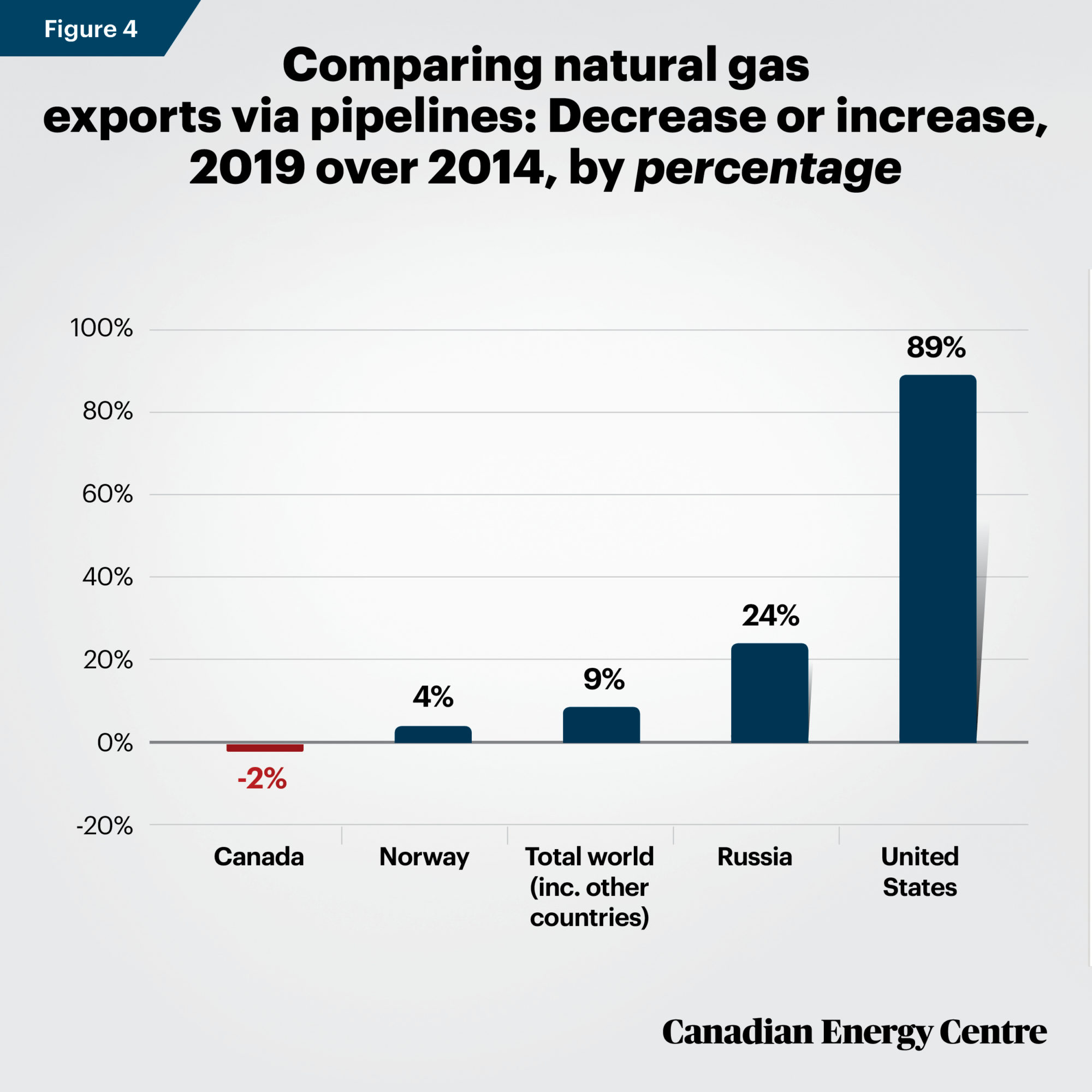 Finally, as Figure 5 shows, Canada has been losing market share in global natural gas production that is exported through pipelines, down to 8.4 per cent in 2019 from 9.3 per cent in 2014. Norway’s market share also declined slightly, to 11.6 per cent from 12.2 per cent. Russia and the United States have both seen a significant rise in their share of natural gas exports through pipelines, rising to 8.8 per cent for the United States in 2019 from 5.1 per cent in 2015, while Russia’s share increased to 23.2 per cent from 20.4 per cent. 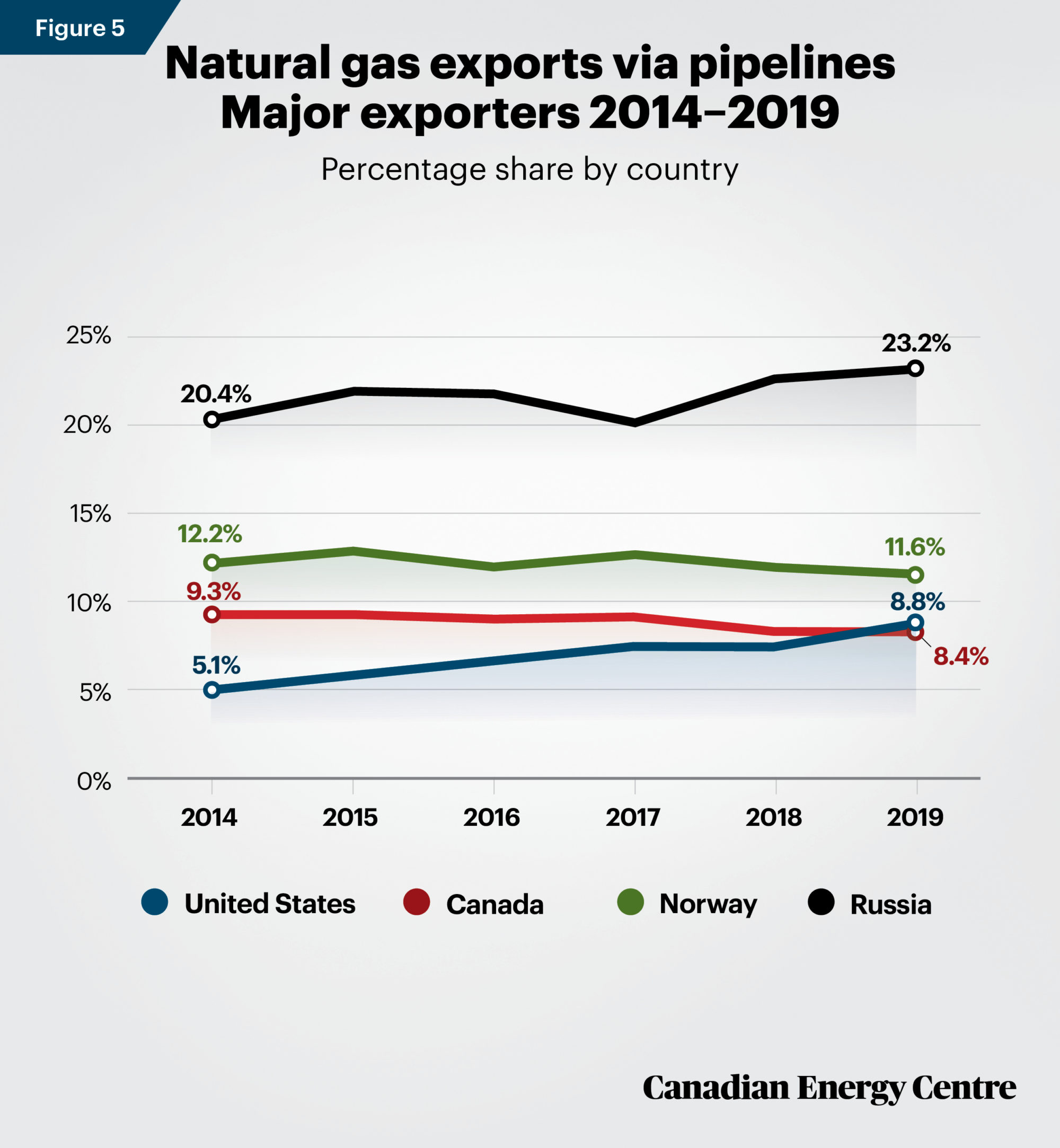 While few Canadian-origin pipelines have been built in recent years, a significant number of new oil and natural gas pipelines have continued to be built in other countries including one of Canada’s main competitors for energy investment, the United States. Alberta alone has lost an estimated $40 billion in revenue since 2013 due to a lack of new and expanded pipelines.

More positively, and “flipping” the caution against sacrificing new pipeline capacity in the future with the benefits of new pipeline export capacity, Canadian producers and governments stand to gain more than $43 billion in income by 2023, or almost $9 billion per year. The potential for job growth is about 35,000 new jobs per year across Canada.

This CEC Fact Sheet was compiled by Ven Venkatachalam and Mark Milke at the Canadian Energy Centre: www.canadianenergycentre.ca. The authors and the Canadian Energy Centre would like to thank and acknowledge the assistance of Philip Cross and an anonymous reviewer for their review of the data and research for this Fact Sheet. Image credit: “Pipeline being installed in forest” by William Taufic.