Are you concerned about disinfecting public spaces at your facility?

In my years as an entrepreneur, it’s been hard not to notice that there always seems to be a ‘next big thing’ projected to completely transform the way we do business, communicate or power our world. Sometimes, it’s easy to get jaded – how many earth-shaking inventions never seem to get off the ground?

It’s no wonder then, that ‘blockchain’ – often discussed, but little understood – was voted in a major media survey to be the ‘Most Overrated Buzzword of 2018”. Whenever people make huge claims about a technology that few people actually see in action, it can start to sound a little overblown. And there are a lot of people saying some pretty amazing things about what blockchains can do.

Patrick Byrne, CEO of Overstock.com and blockchain technology pioneer, has been quoted as saying:

“You’re going to start seeing open-source, self-executing contracts gradually improve over time. What the Internet did to publishing, blockchain will do to about 160 different industries. It’s crazy.”

And according to former JP Morgan executive Blythe Masters:

“The blockchain is the financial challenge of our time. It is going to change the way that our financial world operates.”

That does sound kind of incredible. But while buzzwords come and go, after some very positive and measurable developments in 2018, I’m convinced that blockchains are here to stay – and has moved way beyond being just a trendy term. And even the biggest claims might end up being right.

Just what kind of progress did the Blockchain Industry make last year? This fantastic graph from appinventiv.com shows just how many ways the technology moved forward: 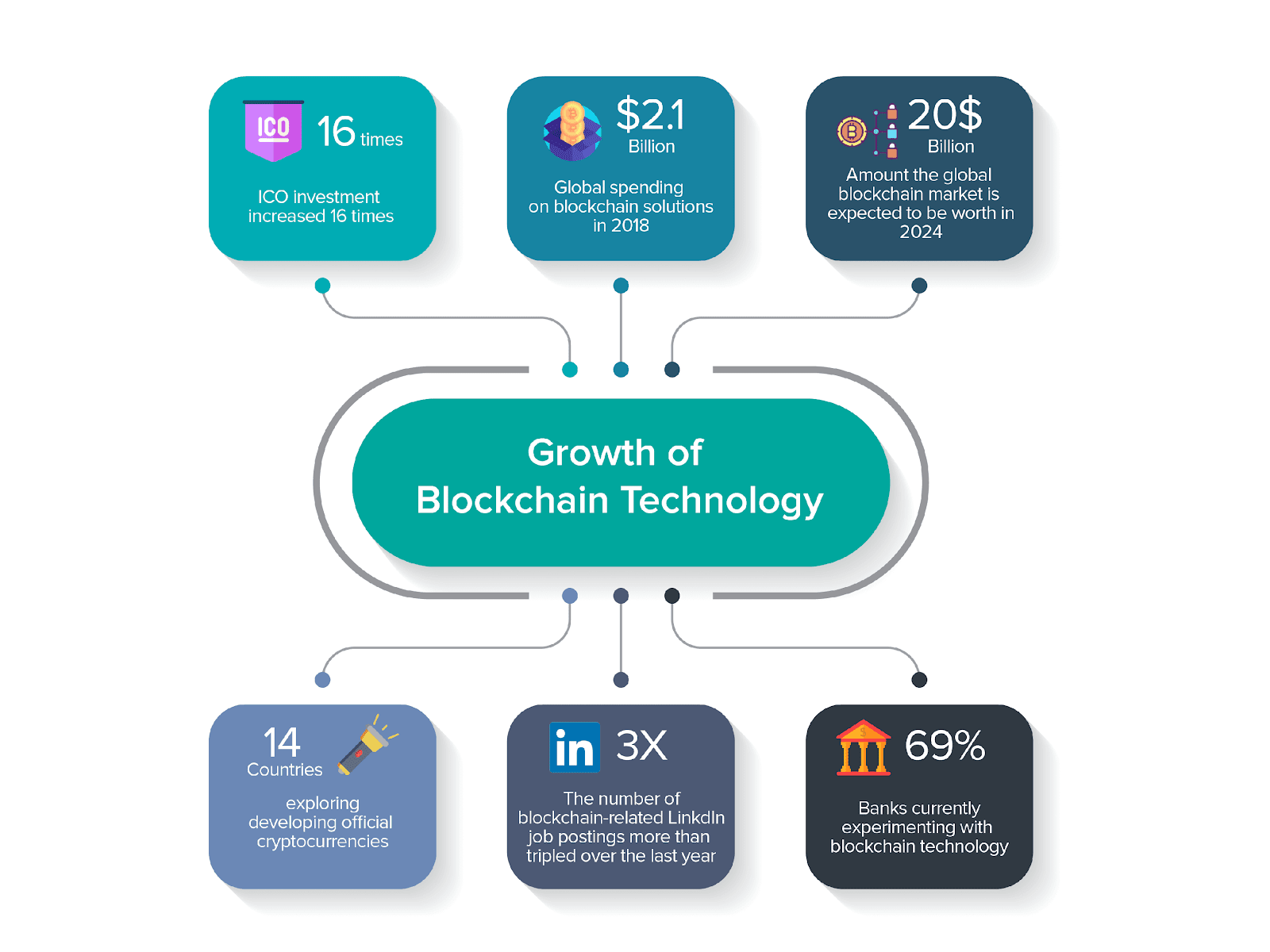 Even in a challenging market, ICO investment was up dramatically, and countries are starting to take the idea of national digital currencies seriously, including China, Israel, Sweden and Russia. On the enterprise blockchain technology side, the vast majority of banks are now testing its applications, and spending on development is just over $2 billion globally (up from $750 million in 2017).

This number is expected to skyrocket over the next few years – the Appentiv graph shows $20 billion in 5 years, but I’ve also seen projections – like this one by Research and Markets – suggesting by 2025, the number could be as high as $41 billion in the USA alone.

That’s a huge amount of investment and it’s growing at a shockingly fast rate. So, what are companies, governments and industries getting out of funding these blockchain-related projects? According to PWC’s 2018 Blockchain survey of top global executives, the corporate world is expecting to significantly cut costs, improve trust, and reduce reliance on intermediaries for things like transactions and data verification. Major areas of development are in financial services, supply chain management, and real estate.

Governments like the UAE, who announced their digital data strategy in April of 2018, are projecting that putting even 50% of functions on the blockchain could save them an astonishing amount of resources every year – including more than 75 million hours of work, and 400 million printed documents. Leading the charge in Blockchain adoption, the Emirates is pushing for implementation within just three years.

Within industry, dozens of major blockchain technology consortia made progress and added prominent new members, like Asia’s ChinaLedger, which is building out blockchain solutions for wide implementation in the Chinese economy, and R3’s Corda-based Marco Polo network, a trade finance consortium with participation from top banks like BNP Paribas, Commerzbank, and ING.

Of course, Blockchain has challenges to large-scale deployment, similar to most emerging technologies, but these are gradually being overcome as the technology matures. The perception that the blockchain’s benefits are unproven is eroding with growing usage and test cases, and advances are continually being made in scalability, interoperability and ways to integrate with legacy systems.

The term ‘blockchain’ may be thrown around a lot – and definitely not always by people who fully understand it – but if 2018 was any indication, it’s moved way beyond being a buzzword, and is continually taking on meaning and importance through its real-world, demonstrated value.

WATCH: “A Stranded Nation” – Pipelines, The Oil & Gas Sector and the Benefits to All Canadians