If we’re serious about both climate change and having a functioning economy, great care will be needed in crafting “just transition” imperatives. Stewart Muir explains why.

With the federal government now talking about “just transition” as a legislative and policy framework for re-doing the Canadian economy, anyone with a point of view on this topic should make sure they secure an invitation to an upcoming advisory process on net-zero implementation.

Although the term just transition in itself isn’t particularly alarming, personally I think it makes more sense to talk about transforming our energy systems. Transition seems to imply that we must jettison the “old” economy. Since doing so also means discarding the basis of Canadian prosperity, that might not be such a good idea. Moreover, since the term just transition itself originated from the Green New Deal movement that regards capitalism as a cancer, it’s not too hard to guess at the political considerations present in the minds of those who cook this stuff up.

The fact is that Canada is a small trading economy that relies for its prosperity on access to world markets for its export goods. If we’re talking about transitioning away from this – which is exactly what “just transition” campaigners like Naomi Klein have for years been insisting we do – then we also need to frankly acknowledge what this transition will mean for those who must (unlike Klein and her husband after their recent uncompeted appointments to prestigious UBC sinecures) toil in the marketplace to earn a living.

Economist Don Wright recently noted that Canada is trapped in a low-wage, low-productivity model when instead we require policy that fosters high-wage, high-productivity outcomes. States Wright, in his article Rhetoric vs. Results: Shaping Policy to Benefit Canada’s Middle Class for the Public Policy Forum, “Governments need to commit fundamentally to raising the standard of living of the broad middle class as a core, permanent objective.”

Wright, until recently the head of British Columbia’s civil service, says that Canadians should expect that each generation will have roughly double the standard of living of the preceding generation: “It will be government’s responsibility to ensure that the conditions necessary for this are put in place.”

The current trajectory is not encouraging. Quips Wright: “Until governments begin to put this at the centre of their thinking, they will continue to offer up Costco samples to the middle class when the middle class desperately needs a full course meal.”

With the phrase “just transition”, drawn directly from hard left-wing eco-socialist movements, being installed as the centrepiece of Canadian economic policy, should we be concerned?

In the immortal words of Geena Davis in The Fly: “Be afraid, be very afraid.” 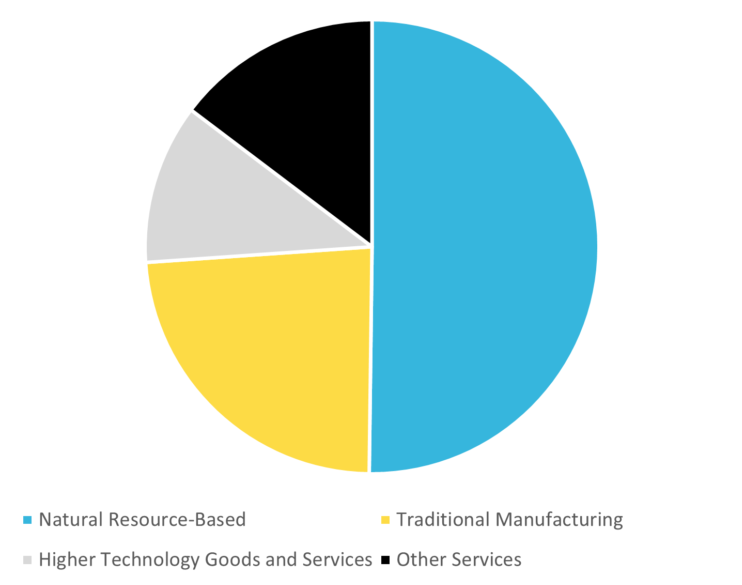 It’s not just that we export a lot of natural resource goods. The impact of the jobs-intensive resource economy is such that natural resources compose 50 per cent of the total base economy in British Columbia, according to a recent economic study.

So influential are natural resource exports, says Wright, that a Statistics Canada study concluded that Canadians were 18 percent richer in 2010 than they would have been in the absence of their natural resource industries.

Since the “just transition” mantra is that all natural resource activities are destructive, irremediable, and must be opposed, where does that leave Canada in economic terms?

With diddly squat, it appears.

Here is what Wright – a most level-headed and temperate of analysts – has to say about this question:

Notwithstanding the undeniable contribution natural resource industries make to a higher standard of living, there is currently considerable discourse about the need to migrate away from this part of Canada’s economic base to one based on the new, emerging, green, intangible economy. The underlying model for this transition is explicitly or implicitly a version of the “Silicon Valley Model” — that Canada should invest in creating the technology ecosystems that will allow it to build its own Googles, Amazons and Microsofts.

The answer, it seems, is that we don’t need to worry about this because the pandemic has taught us that money is free, and Canada no longer has to worry about government deficits and debt levels. As a result, we can, in Wright’s words, “just buy (i.e., subsidize) whatever type of economy it wants.”

Wright advises us not to fall for this way of thinking. Money is not really free. Eventually, the piper will have to be paid.

Outside of the major concentrations of population in the southwest corner of British Columbia, southern Ontario and Greater Montreal there is relatively little hope for a significant economic base save for what is offered by the natural-resource sector.

Wright is hardly an advocate of brawn over brains, in fact he places innovation at the centre of what Canada must do to solve the riddle of sustainability and economic success. He credits author Dan Breznitz for these three key insights:

To me, this is a description of transformation rather than transition. Wright says that Canada will be making a major mistake, with profoundly negative consequences for its standard of living, “if it prematurely sunsets what has historically been its major comparative advantage — its natural resource-based industries.”

Wright urges that Canada builds on the natural resource sector “through a no-illusions innovation strategy that will stretch and evolve those industries and use them as a platform to support the growth of its ‘intangible economy.'”

Coming full circle back to this use of the term “just transition”, you should be able to see why I share Wright’s concerns. We need to reject the thinking that it’s time to trade away our prosperity for the shiny objects offered by the coalition of eco-socialists, contrarians, anarchists, and pitchmen who have so effectively captured the imagination of the federal government.

Stewart Muir is the executive director of the Resource Works Society.
https://www.resourceworks.com/just-transitions