The Gamification of Oil and Gas – Geoffrey Cann

Four-in-ten Canadians, and six-in-ten CPC supporters, are absolutely certain of their vote in October

July 16, 2019 – While the Conservative Party of Canada maintains a comfortable eight-point lead over the governing Liberals, all eyes are on the latter party to see if its slow increase in voter intention over the last three months will maintain momentum or run out of steam.

The latest public opinion survey from the non-profit Angus Reid Institute comes as time has distanced the Liberals from the SNC-Lavalin scandal that shook the Canadian political landscape in February and March, allowing the governing party to retake a lead in Quebec and Atlantic Canada.

The performance of Justin Trudeau’s party also appears to be improving in British Columbia, though the Conservatives still maintain a 12-point advantage in that province.

While CPC leader Andrew Scheer will doubtless be reminding Canadians of the SNC ordeal over the coming months, both of the frontrunning parties have shifted much of their focus to environmental issues, namely the federal carbon tax and pipeline development.

The battle for environmental program supremacy comes as the environment and climate change are chosen as a top issue by one-third of Canadians (33%), well ahead of health care (22%). Further, at least half of those who intend to support the Liberals (50%), NDP (49%) or Green Party (65%), say this is one of the two most important issues facing the country today. 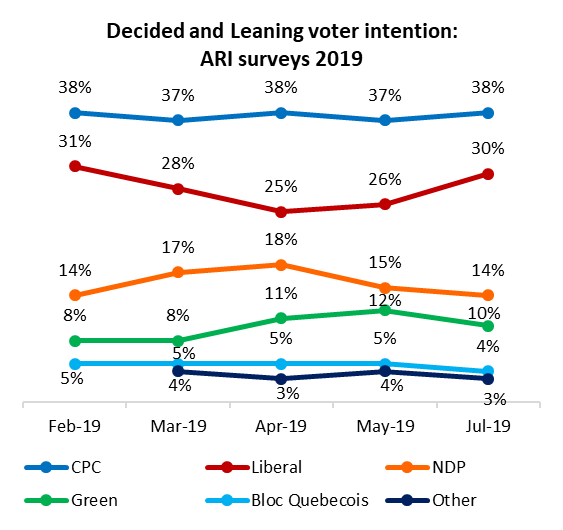 Read the rest of the story here: www.angusreid.org/federal-issues-july2019