June 7, 2019 – The squad of conservative provincial leaders grew in Canada this quarter with the addition of Jason Kenney in Alberta, supplying another voice to a coalition of premiers vowing to fight federal carbon pricing.

Kenney, who led his United Conservative Party to a majority government on April 16, is very much in the honeymoon phase of his relationship with Albertans – six-in-ten (61%) of whom approve of his job performance thus far.

Remarkably, three provincial premiers find themselves above the sixty per cent approval mark among their respective electorates. Time spent in office may have something to do with this. Indeed, five of the most popular premiers in the country are less than two years into their first term. 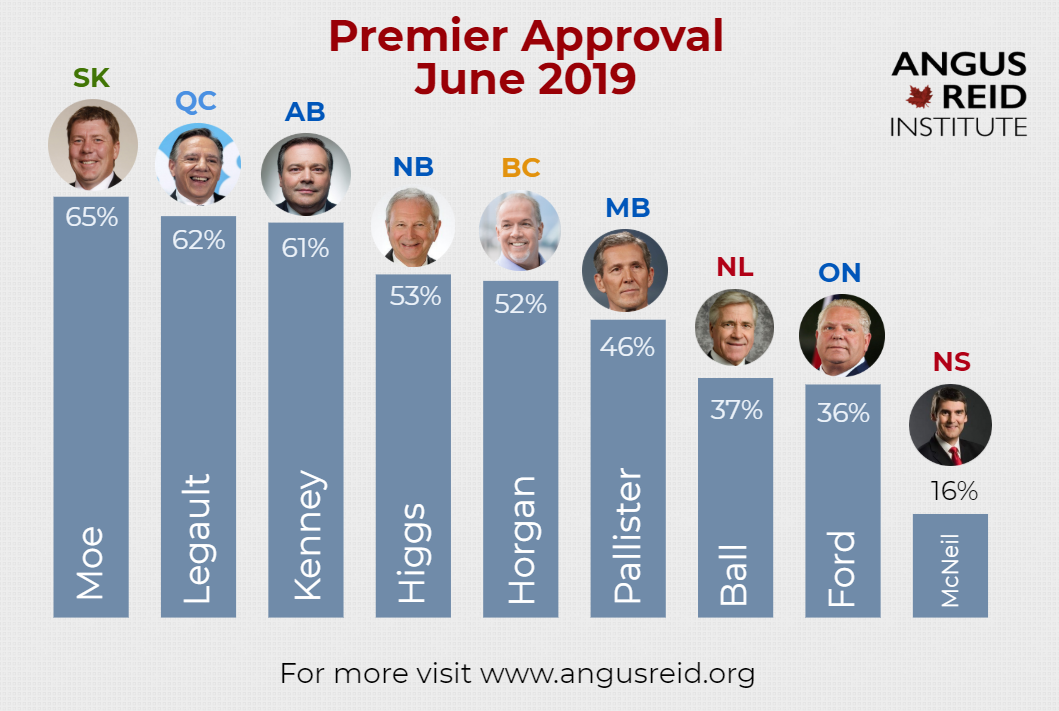 Albertans voted for a return to their long-held tradition of Conservative government at the provincial level, electing members of the UCP to 63 of the 87 seats in the province, and ending Rachel Notley and the NDP’s time in government after just one term.

Kenney’s first action as premier was to introduce the Carbon Tax Repeal Act to remove the consumer tax on gasoline and fossil fuel heated homes. The bill was passed and signed into law, foretelling perhaps a legal battle with the federal government, which reserves the right to implement its own carbon pricing mechanism in provinces that do not generate their own plan.

Kenney is joined by Canada’s most approved of provincial leader, Scott Moe (65% of people in Saskatchewan endorse his job performance, a six-point increase since last quarter), in his fight against the Trudeau government’s federal carbon pricing program. They have agreed to work together to appeal the carbon tax in federal court. In May, Saskatchewan’s Court of Appeal ruled in favour of the federal government on the issue, stating that the tax is constitutional. Minister of Environment Catherine McKenna called the ruling “a win for Canadians”.

Among Canada’s most approved of premiers, Quebec’s François Legault continues to enjoy strong support in his province, holding the approval of more than six-in-ten residents (62%) for the third-consecutive quarter since the election of the Coalition Avenir Quebec. This, while his party’s signature legislation, Bill-21, which seeks to ban religious symbols for public servants in positions of authority, inches closer to becoming law.

Read the rest of the story here: www.angusreid.org/premier-approval-june2019