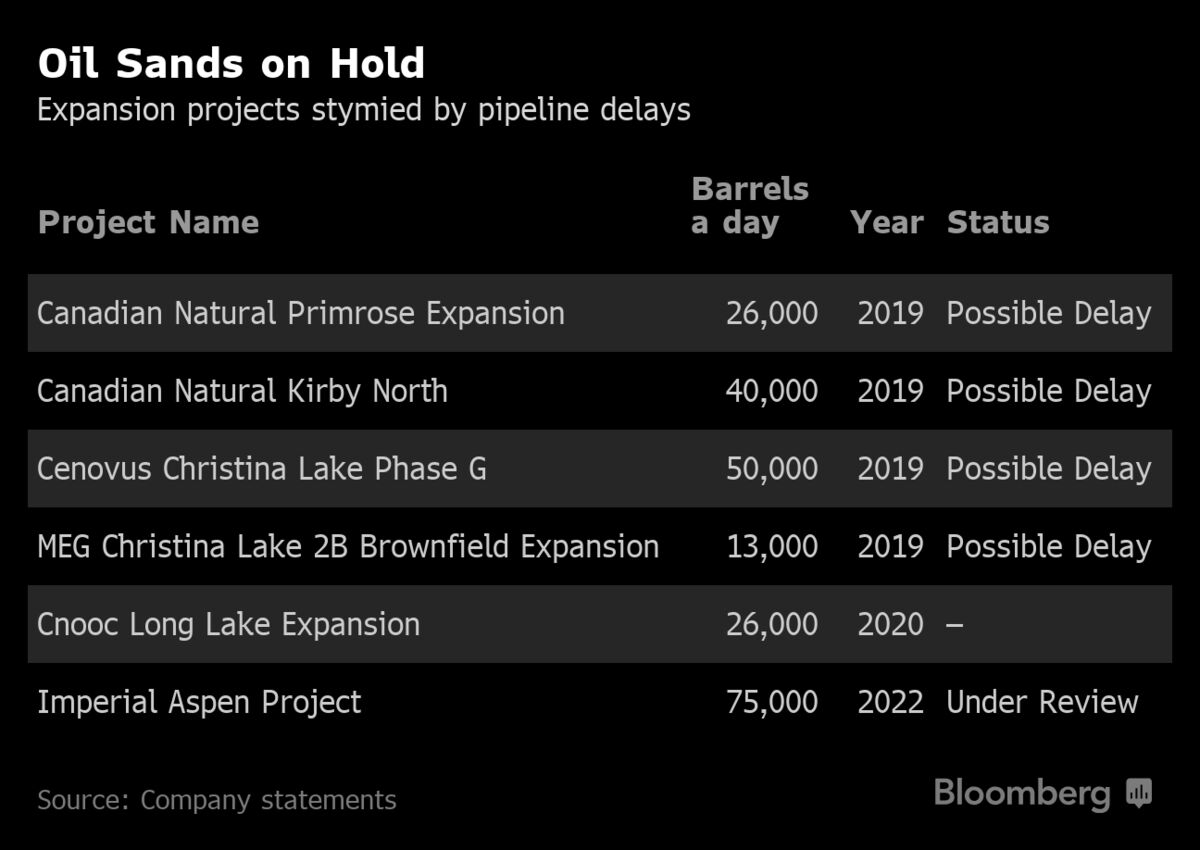 MEG had planned to ramp up output at an expansion of its Christina Lake oil sands project in the second half of the year. Now, the “probability of that going ahead this year has decreased” after Enbridge Inc. announced a year delay on its Line 3 expansion, Derek Evans, MEG’s chief executive officer, said March 8. In November, Imperial Oil Ltd said it would push ahead with the 75,000 barrel-a-day Aspen project. Last month, CEO Rich Kruger said the company is reevaluating its assumptions about Aspen after Alberta’s oil curtailment “introduced new risk.”

Nearly five years after oil prices collapsed and companies slashed spending, some oil sands producers had been looking to grow again. But pipeline shortages that sent Canadian heavy crude to $50 a barrel below West Texas Intermediate futures late last year and the government-mandated output cuts that followed have tempered the newfound optimism.

“We don’t want to be building capacity into a system where we don’t have the ability to move it,” MEG’s Evans said in a conference call last week.

Cenovus Energy Inc.’s Christina Lake phase G expansion is scheduled to be ready for production in the second quarter but the timing of the start-up will depend on “sustained improvements in market access and heavy oil pricing,” Sonja Franklin, a company spokeswoman, said in an email.

Canadian Natural Resources Ltd. could defer the start up of the Kirby North project and has flexibility with its Primrose site if Canadian prices collapse again or there “is going to be a problem,” Tim McKay, chief executive officer, said in a conference call March 7.

“It’s just too early to say whether we’d start those projects up” or delay them, he said. “We have that optionality.”

Canada’s oil producers have struggled to export crude to the U.S. and other international markets after projects to expand pipelines were delayed and existing pipelines filled up. The Alberta government ordered producers to curtail supply in order to ease the glut and boost prices.

Enbridge announced that its expanded Line 3 from Alberta to Wisconsin would start operation at the end of 2020, a year later than planned, because the permitting process won’t be finished before November.

The Trans Mountain pipeline to Vancouver was delayed by at least a year after a court decision last summer forced a new regulatory review. Prior to the decision, the pipeline was purchased by Canada’s federal government after Kinder Morgan Inc., the previous owner, threatened to cancel it amid environmental opposition.

A third pipeline project, TransCanada Corp.’s Keystone XL pipeline to the U.S. has yet to receive a final go-ahead from the company amid similar hurdles.

Rate cut coming with Canada ‘one notch’ from recession: Rosenberg